I'm temporarily returning (I know, try to contain the excitement) to do not only a review on this film BUT a DVD giveaway. I'm not sure yet if it'll be at TD or here but keep back for updates. I also have a horror short for you this Sunday and a surprise review in two to three weeks. As well as the Retro Review next week. So please keep back to get more details. And I wanted to say thank you to the followers who still joined my blog despite a painful lack of review postings. I think I've had more press releases than anything. Either or thank you, it still makes me spazz with excitement.

EVIL HAS A NEW ADDRESS  ... "THE PERFECT HOUSE"!
The Perfect Horror Movie With The Perfect Terror Tale
Of The Perfect Dream House With The Not-So Perfect Past! 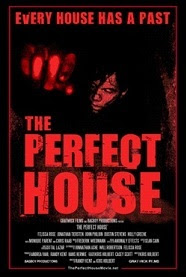 Lots of films are made without money, studio backing, Hollywood contacts or professional actors every year, but very few have the polish and cache of Gratwick Films groundbreaking independent feature film "The Perfect House".


"The Perfect House" not only marks the official feature directorial debut of Buffalo (NY) native Kris Hulbert, but also makes cinematic history in filmmaking as the world' s first indie feature film to ever premiere on an independent-movie distribution platform built for Facebook.


The first film to officially virally debut on the hugely popular social media platform (Facebook), "The Perfect House" has been touted as the trailblazing film that has redefined the traditional methods with regards to standard Hollywood channels of distribution in today's entertainment landscape.


Having already garnered a legion of fans, the overnight sensation online full-length film has undeniably become the talk of cyberspace, instantly developing a following that has now taken a life of its own. Currently available on Facebook for only $3, "The Perfect House" (a Gratwick Films Production) is continuing its successful interactive run. It will next  be released on DVD July 17 and on VOD (with a never-seen-before behind the scene documentary) on October 1, 2012, through all major online platforms including Facebook, Gratwickproductions.com, ThePerfectHouse.com, among numerous other distribution outlets.


Pioneering the concept and use of “vertical integration” from the idea to the method of consumption, Hulbert along with Gratwick Films business partner Andrea Vahl are – much like the Steve Jobs’ of the world – spearheading THE novel distribution model of the future. A model centered on the artist as a viable independent entrepreneur and not a slave to the studio system and its corporate distribution tycoons.


Never judge a book by its cover, or in this case a house by its owner! That, in a nutshell, is the premise of the film that currently has cyberspace wrapped around its fingers.
It’s a riveting, visually intense, psychological examination of what real life horror is – the capacity for evil that hides within each of us yet remains anonymous. Shedding light on what the human spirit can ultimately destroy, endure and overcome, the film focuses on the nonsensical, random, at times ruthless and fundamentally relative aspects of true real horror.


Written/Produced by Kris Hubert and Co-directed by the latter and Randy Kent, "The Perfect House" is the buzz-heavy anthology horror movie about a dream-house with a hidden dark past. The film features an ensemble cast including Jonathan Tiersten, Andrea Vahl, Chris Raab aka "Raab Himself", Will Robertson, John Philbin, Becky Friedman, Hans Hernke, Holly Greene, Dustin Stevens, Jamie Lee Baker and Angelina Leigh, to name a few.


Shot guerilla style on a micro budget with no Hollywood contacts, on location in Buffalo, in the impressive span of just fourteen days, the film retraces the horrific history of a seemingly perfect house via three separate stories skillfully bound together by one principal frame plot and one central character: the (perfect) house.


Providing three unique tales of horror - subtitled in order of appearance: "The Storm", Chi-ken" and "Dinner Guest" - Hulbert brilliantly creates a captivatingly dramatic unity that organically holds the multiple plot lines together and flawlessly carry the momentum throughout the entire film leaving the viewer with a sense of completeness.
The DYI filmmaking approach certainly didn’t deter Hulbert and his entire team from delivering a fantastic feature film that more than successfully legitimately competes with big-budget Hollywood motion pictures in quality and storytelling.


But more than a craftily executed filmmaking technique that is both intentionally avoiding the traditional typical three-act structure, and challenging the basic principles of screenwriting by voluntarily writing a story with no character names or defined location, what the film fundamentally delivers is a uniquely endearing homage to the horror genre.
“The Perfect House” is a real horror movie that takes the standard Hollywood formula for this filmmaking style, kicks it to the curb with an in-your-face real raw horror.


Unlike any other films, "The Perfect House" successfully runs through all the horror-movie genre's signature styles of three specific time period of horror: the 60-70s black & white off-camera violence suspense ("The Storm"), the classic 80's slasher with dark humor mixed in and crazed unstoppable killer on the loose ("Chi-ken"), and modern day graphically disturbing massacre with icy cold feel and the brutal unrelenting conclusion ("Dinner Guest"). With that in mind, everything from the plot of the stories, the lighting, the shot selection, all the way through the post sound and color correction was specifically designed around the objective of faithfully adhering to the established styles and standards of these different sub-genres of horror.


When Kris Hulbert set sail to Buffalo to make his first co-directorial effort, he had one simple goal in mind: to turn his short film "Dinner Guest" into a full length feature film.     To keep the shoot extremely cost effective he ingeniously elaborated a high concept story based on the grassroots approach of utilizing what was available: a single free location (his grandfather's house in Buffalo), friends and family who made up the initial investors, and the committed dedication of passionate actors to play his characters.


The film comports an equal mix of recognizable Hollywood talent with fresh faces and local talent from Western New York.  The result is an impressive collaborative effort from both cast/crew members who all, ultimately, were an integral part of the overall process, not to mention, took a giant leap of faith to be part of this extraordinary cinematic experience, albeit one that offered small monetary compensation privileging instead budget-spending on high-tech professional equipment.


The lack of experience, they all commonly shared not only allowed for a strong feeling of camaraderie on set –one that also transpires onscreen – but also became the greatest asset of the filmmaking process as everyone got rid of the ego involved in shooting, instead leaving space for collaborative creativity and experimentation.


A behind the scene story almost too good to be true! Yet what Kris didn't know was how that seemingly perfect true Hollywood fairy tale type of story would quickly turn into a real nightmare. Ironically, much like his fictional "Perfect House"' has, underneath it all, more stories to tell, there's also more to this phenomenal filmmaking journey than meets the eye.


For Hulbert the task of recovering his producers’ operating and investment costs and securing a major distribution deal proved to be more daunting then first assumed.
Learning to swim in the shark tank that is the ferociously unscrupulous Hollywood money-driven machine, Hulbert endured – post making of “The Perfect House” phase – his own real life horror, namely the political, bureaucratic, corporate and individual corruption of the studio distribution system. But as the saying goes: It’s not the destination but the journey that counts – especially when the journey has become the ultimate modern day tale of the classic story of David v. Goliath. And who doesn’t like routing for the “underdog?”


In many ways, “The Perfect House” can be seen as cathartic for the young filmmaker. On and off the screen, the film became, literally and figuratively speaking, a very real and disturbing manifestation of true horror for Hulbert.


While major distribution deals were pouring in, notably an offer for the film at the Cannes Film festival, Hulbert and his team opted to walk away, whilst standing up to the politics and personal agendas of the corrupt corporate executive trope. Returning with more conviction than ever before to his initial self-distribution motif, Hulbert confidently stands as one of the first visionary artists to declare his own indie revolution on corporate Hollywood.


Kris Hulbert still remains at the forefront of the next generation of filmmakers. Sticking to his “high-tech guerilla” business and production model via Gratwick Films, the avant-garde storyteller and entrepreneur is securely cementing his status as an enduring talent who has pioneered a new wave of filmmaking where a no-to-low budget equals just as many opportunities and possibilities for distribution and release as a multi-million dollar film.


“With a focus on responsible filmmaking our goal is to eliminate the “clutter” and build a more direct and intimate relationship with our fans.” says Hulbert, “In the era of rampant piracy, We intend to make it not only cheaper and more convenient, but more engaging and personal to support our brand of entertainment.”


And “The Perfect House” is only the beginning!

Posted by Bleeding Dead at 8:25 AM
Email ThisBlogThis!Share to TwitterShare to FacebookShare to Pinterest
Labels: Press Release