Happy Irrelevant Post Friday. As like last month I couldn't go without posting at least one, albeit at the end of the month but here it is. There's not much to say as far things go, as you've noticed I've still been pretty much on hiatus with this blog and will continue to be for the most part. For a few reasons actually, which I'll explain.

As of the moment I hate my job. I plan on quitting in the near future and finding a better job but honestly I don't want to be a server for the entirety of my life. I love writing, and not reviews. Don't mistake I enjoy doing those too but my real dream in life is not to be the next Roger Ebert (can you imagine??) but hopefully something along the lines of the next Clive Baker. I do want to be a fiction writer and hopefully not a struggling one, but I'll honestly settle for struggling writer over struggling server. This being my dream I need to start writing my own stuff again because I'll tell you as of right now one hundred percent of my writing goes towards this blog and the stuff at TD.

Also when I started this blog it's because Netflix decided to sit on a giant stick and became stuck up technology snobs who cared only about money. Basically I liked writing reviews on Netflix but they took away the friends page which made it hard to do that, and also without much purpose. Anyways back then I only really wrote reviews when I felt I had something different to say about the film than everyone else. And often times now I find myself forcing to write a review (Psycho II) and I don't like doing that. Because then I'm just saying to just say something. I prefer when my writing has more purpose behind it. It senseless for me to write a review about a movie I was indifferent too.

Out of all this though please don't take that I'm leaving this blog in anyway. Of course not, I love being part of this community and I love writing reviews. I'll still post reviews but they may or may not be on a weekly basis. TD reviews will still be the same (twice a month, next one is tomorrow) and I'll keep features like the horror shorts. I'm not doing the top five lists for next month because it's too much work and will distract from my original writing. Again I hope all my followers stay with me and check back regularly. I will try to get at least three reviews to you a month as well as the TD. And regardless without the Top Five Lists I'll still have cool stuff since it's Halloween. But again thanks for your support and for reading, if I didn't have you I'd of quit this long ago.

Another Retro Review. Discouragement is starting to fill the void that was once passion for writing film reviews. Maybe this is to my ignorance but I thought these Retro Reviews would get me a lot more feedback than my blog reviews. I can understand nobody commenting on a small time blogger's post but a site like Truly Disturbing? Maybe the truth is I'm not good at writing and they don't hold any interest. I don't know, I'm not quitting yet but honestly what's the point if no one reads or bothers to comment. 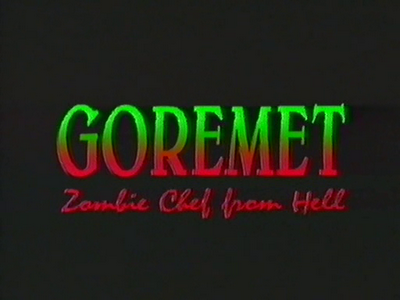 "Off the sandy shores of the ocean Gonza's Deli frequents many customers, luring them in for it's atmosphere and quality food. Little do these customers know though that Gorza's Deli is a front for what I presume to be illegal alcohol sales and a six hundred year old cannibal cult that serves to Satan and the uncontrollable lust for flesh. The customers that frequent Gonza's Deli don't appear out of the normal, which is a clear sign of evil cult followers as most of them are. The facade doesn't foul the good side though as the brother of Gonza, or the man who stands outside the Deli and warns people not to go in, is plotting to destroy Gonza and his human butchering Deli once and for all."

And as usual you may read the rest here. I don't have much else to say this week, maybe it's just a bad day or night, I'm not sure. But I'm likely not posting any film reviews this month for this blog because I have a lot of movies to watch for TD and for next month's Top Five Lists (remember that promise I made that I watch the films throughout the year, yeah about that...). It's best this blog stays on hiatus. If it convinces you any more how depressed I am about the lack of comments I forgot to mention that I did write this review within two weeks of the last review, give or take a day. I can't even be proud of myself anymore. I did it but who cares?

At least there's one thing, my mopping and feeling sorry for myself is likely more scary than Gore-met, Zombie Chef From Hell. So there's your horror for the day.
Posted by Bleeding Dead at 7:00 PM 2 comments
Email ThisBlogThis!Share to TwitterShare to FacebookShare to Pinterest
Labels: TDHorror Retro Review
Newer Posts Older Posts Home
Subscribe to: Posts (Atom)