I'm curious if it even matters since I have no followers but yes I haven't posted in two months now due to school and detached interest. Seeing as no one reads my reviews I'm more or less talking to myself but oh well. I'm in a current state of boredom so I've decided to post a review or two. 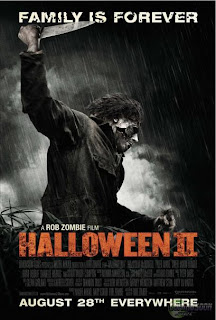 I'm a fan of the original Halloween II, though John Carpenter himself doesn't really care for it I find it to be in par with the first and fairly decent for a sequel, which is saying a lot considering the reputation horror movies have for their sequels and remakes. But I'm not reviewing John Carpenter's film, I reviewing Rob Zombie's. What's my verdict? I assure you, I'm surprised that I'm actually going to put this but...it really wasn't all that bad. Maybe its because I read the reviews for it before I watched it and had such low expectations that it turned out better than expected, or maybe I've seen too many horror movies and I no longer can decipher any more what is shit and what is good. Either way, yeah I liked it. 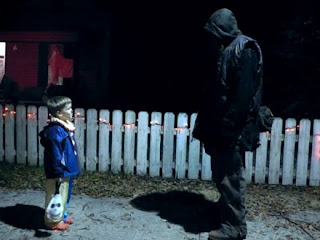 Don't let that suggest that the film is flawless, far from actually. There's...several issues with the film, first and foremost the biggest in hardcore fans eyes is Michael as a character. He grunts now, if you must know, making him feel not so much like the original Michael Myers. Following him is Dr. Loomis (who, by the way, I was for in casting Malcolm McDowell) who's become the world's biggest Diva; as he he's out promoting his new book which, in traditional Gail Weathers fashion, exploits the murder's in the first movie. Then there is Scout Taylor Compton and her...ugh...I don't know if I can call it a performance it's so bizzarely  (not a word) awful. Her alone probably put me over the edge in hating the second half of the first film, so in short I've never really like her as Laurie. If anything I'll give her that she was a bit more tolerable this time around. And finally there is is the Ghost Mom. That side story shouldn't have even seen the light of day it was so pointless. Not to mention the ending of the film just plain sucked. 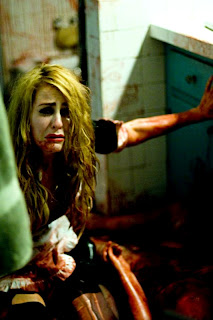 If your not discouraged yet by that last paragraph, remember that I did say I enjoyed the film. In my opinion the good Zombie gives to the film out weighs the bad. Rob Zombie may not be the best writer out in Hollywood but this is the most original Halloween to date, which is refreshing since slasher films are as cliche as they come. There's a lot of moments in the film between Annie's and Laurie's characters that demonstrated the strain on their friendship, and unlike a lot of people I don't think the plot of Laurie becoming a more darker human being is that much of a stretch, considering she survived a horrifying incident (AKA I'm not going to throw a hissy fit because she has a poster of Marilyn Manson on her wall). What has been an appeal about this film and the first is Zombie's homage to horror films by casting icons (Dee Wallace, Malcolm McDowell, Danny Trejo) but I'm most enthusiastic at giving Sheriff Brackett (Brad Dourif) a larger role. Besides the plot the cinematography is flat out gorgeous. His use of darks in contrast with lights is stunning and several shots are alone memorable solely on the cinematography part. 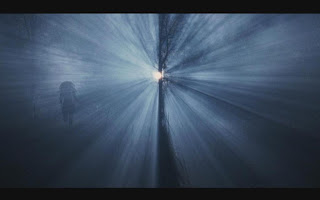 More than anything it was better than his 2007 rendition of Halloween, which I enjoyed only in part. Hell, I'd probably watch it again if there was nothing else on TV, I honestly didn't find it as bad as some did. If you detach yourself from the original series and then view it as a film you could see that maybe if Zombie had made this with different characters and not in the Halloween franchise it'd be a fairly decent bloody horror movie. Not for die hard fans but maybe for those who are a bit more open minded.
Posted by Bleeding Dead at 2:28 PM 0 comments
Email ThisBlogThis!Share to TwitterShare to FacebookShare to Pinterest
Labels: Bloody, Horror Icons, Remake, Slasher Film, Visually Satisfying
Newer Posts Older Posts Home
Subscribe to: Posts (Atom)