Horror Short: Suburban Zombie or The Decay of the Mind (2012) 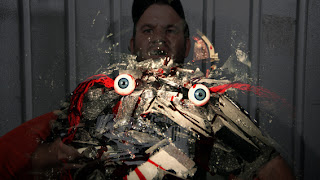 In this one minute short film a zombie heedlessly watches the television screen in a storage shed until the pictures becomes static and he's temporarily broken from the trance. As the zombie stumbles outside he sees a glimpse into the real world he leaves in. The film diveles away from the literal horror term and is used as the metophic slang often allocated to avid TV watchers. The brief minute is able to get it's message across but after a second viewing on my part. It portrays a society where the 'zombie' is expected to watch TV and is in a controlled environment. When the control group falters for a moment he gets a brief glance at the real society but being a zombie retreats back into his storage shed with the broken TV and continues to watch. It's a social commentary that should be addressed to us all.

The minimal footage is enough to make you ask questions and create different opinions on what its to say about our current world but is the biggest fault against the film. A minute more would of been enough to give it a bit more build. Your in this zombie created society for one brief minute and in that you don't have enough time to process or grasp the lost mind of the zombie. The direction for the film is fair, it at one point showed that of an independent filmmaker but only for a brief few seconds. The rest was done on a very visually appealing scale, with cool cinematography that serves as the most horror aspect to the film. Almost used on a subliminal note, as it may be. I also really liked the music direction for the film, it was a noticeable addition that did not dominate but progressed the film.  Suburban Zombie or The Decay of the Mind is available for free on youtube. It's a good short watch, one I wish was just a little bit longer.
Posted by Bleeding Dead at 9:12 AM
Email ThisBlogThis!Share to TwitterShare to FacebookShare to Pinterest
Labels: Horror Shorts, Zombies