Not my favorite review and I'm late on it, as usual. But it's up. 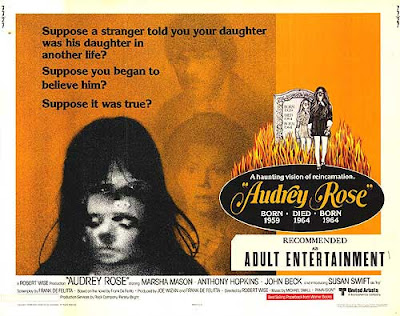 "The horror itself is in Ivy's very intense episodes of living in Audrey Rose's last moments and more so when her father settles her down. Rather chilling and a discomfort to the senses as your not sure how to feel about Hopkins character. Also a great aspect to the film is the father's ability to never appear in a clear lens. Often I was convinced that he was insane and made it up as he went along. But the acting is so exceptional that its hard to doubt him"

As usual you may read the rest here.

I have a few updates to share with you, since I'm here and all. First I'm running a contest for the film The Perfect House, in which you have a chance to win a copy of the DVD for free. All you have to do is recommend me an Obscure Haunted House film (for my next TDHorror review of course, because I'm too lazy to do it on my own) in the comment section and you'll already be at exceptional odds to win. Meaning which even if you recommend the most known and common haunted house film, like Poltergeist, you'll already be in the lead. Because no one has commented. So please do it. I would love you forever if you did. Here's the link that'll lead you to the post with the rules.

Next today is July 17th. Know what that means? Midnight Son is on DVD. If you don't recall or are new to this blog Midnight Son made my Top Five Films for 2011 at Truly Disturbing, and was the film I got to see at the Mile High Horror Film Festival. You can get the film at Walmart or order it off of Amazon. If you don't recall I called Midnight Son "basically a sublime film that I want to own". And now I can.
Posted by Bleeding Dead at 1:53 PM
Email ThisBlogThis!Share to TwitterShare to FacebookShare to Pinterest
Labels: TDHorror Retro Review