My review of Night Whisper Lane is available here. But there's also a contest in the review, a fairly easy one in my opinion, where you can get the game for free on your IPhone. I have 20 promo codes to give away and so far I have given away none. So your chances are pretty spectacular. 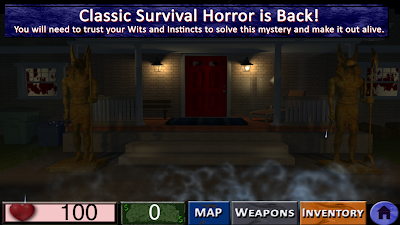 About The Game:
Experience the game they're calling "Point, Click & Die" - Now even more terrifying!

★★★★ "Night Whisper Lane is worth a purchase, it's creepy, fun, and will keep you occupied for a while" - Bleeding Dead Film Reviews 3.5 / 5

★★★ Hard to solve, "Have you wondered how it would be, if some invisible force would push you into a big house full of mysteries and great dangers?" -- apposky.com - 6.8 /10

★★★★★ "I'm an avid player of horror games like resident evil and silent hill, and I am really enjoying night whisper lane! What I like about it are its simple tap controls and turn based boss stages, it's quite unique!" - cindygirl0812

★★★★★ "If you're looking for a fun, scary mystery game look no further" - bertybottom

See how long you can survive before One of the many deadly traps get you, "whatever you touch might be a trap"

Can you escape the horrors of Night Whisper Lane and live to see another day.

Night Whisper Lane is the 1st authentic Survival Horror gaming experience specifically designed for iOS that merges classic “Point and Click” gameplay with a “Turn-Based Battle System” to help you fend off whatever evil awaits you in this seemingly endless labyrinth.

You find yourself in presence of an old ominous house without the faintest idea of how you got there, yet you feel drawn to it and are compelled to enter. Immediately you look down to your arm and see….Goosebumps. As you reach to find the door you entered blocked, the shivers spread to every toe and finger tip.

You will need to trust your instincts, wit and memory to uncover the mystery behind the house and its connection to a mystifying femme fatal. Will you survive long enough to escape from the terror on Night Whisper Lane?

WARNING/DANGER: There are many hidden traps and deadly encounters on your journey that can and will kill your character! Be mindful of what you interact with as you look for items to solve puzzles and unlock doors & passages.

Weapons & ammunition are scarce so keep an eye out for them and manage them wisely because fighting empty handed is certain death.

Make sure to restore your character's health by using Bandages and First-Aid kits especially if you have a sneaky suspicion a trap or encounter is lurking around. This concludes the Survival Guide.

If you have any issues please drop us an email -support@epxgames.com
Night Whisper Lane includes Scenario 1; A New Scenario will be released every 2-3 months. All Scenarios will be FREE
Purchase the Full game via App Store
https://itunes.apple.com/us/app/night-whisper-lane/id571163727?mt=8&ign-mpt=uo%3D4
Download the Free game via App Store
https://itunes.apple.com/us/app/night-whisper-lanefree/id571175527?mt=8&uo=4
View the HD Night Whisper Lane Version 1.0.2 Feature Trailer on YouTube at
http://www.youtube.com/watch?v=f35PWoDHeOU

To download the trailer for use on your site, please visit the link below
http://www.sendspace.com/file/7p3civ
For more information on Night Whisper Lane visit www.epxgames.com
Follow us on Twitter http://twitter.com/EPXGames
Like us on Facebook http://www.facebook.com/EpxGames
About Us
EPX Games is an independent studio based in Toronto, Ontario. Our love for games and the development of them has led to our first major release: Night Whisper Lane for the iOS platform. We believe that innovation; dedication, originality and enjoyment are at the heart of amazing games.
We will continue developing more titles that follow the same principles. We specialize in the development of games that are easy to play, easy to learn, and most importantly fun! We hope to captivate gamers of all ages from various backgrounds to enjoy the games we have to offer!
Posted by Bleeding Dead at 8:25 AM
Email ThisBlogThis!Share to TwitterShare to FacebookShare to Pinterest
Labels: Press Release