WARNING: May Contain Some Spoilers 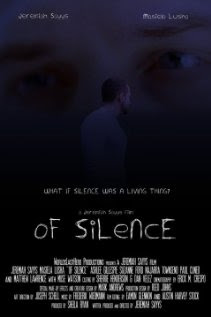 Colby is man confined by his past horrors and the current ones that invade his broken life. After an accident causing damage to his ear Colby's love of scuba diving is lost, as well as a steady pay. And with the death of his wife following in recent wake it doesn't help as Colby becomes more withdrawn from family and life. Debt collectors, a worried family, and no other job passion Colby is falling further into depression. And to make matters worse he begins to hear strange and frightening noises, ones his family and the people around him cannot hear. As Colby divulges further into isolation and deeper into his wife's death, he's to uncover a horrifying presence that could take away the only meaningful thing left to him, his sister Haley.

Of Silence is a different kind of horror film. A simple but aesthetic piece that looks more to a sophisticated level than that of something floating around the indie circuit. Although I can see where a few people may not care for it as writer, director, and star of the film Jeremiah Sayys pays more attention to the subtler build than to a hellacious climax. There's not much visually occurring as the director wants you to listen rather than see the nightmares that surround Colby's life. As any void of dialogue is filled with unique sounds that don't attest to the common horror noises. There's an unsettled sense in your incapability to define what they are. However, your not denied entirely of a monster as the final product does offer a creature but still yet it remains mostly in the shadows. The special effects department creates creatures that look rather interesting, a bit of shame as you never get full exposure but that of course adds to the effect. Less detail is attended to some of the smaller effects, i.e. the smoke, but an overall professional effort on their part. 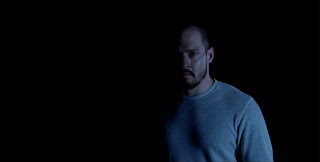 Usually when a person tries to write, direct, and act in a film they tend to be mishandled, with the qualities varying between the fields. But Jeremiah Sayys seems to have it down as he's preeminent in all aspects. There's a small moment in the film where Colby shows a remote bliss, one that really isn't seen throughout the rest. A smart directorial and acting choice for the film as the slight act elevates both the performance and the character. It let's way to a Colby that the audience never really gets to know, but at one point did exist. And of course the rest where he's imprisoned by his melancholic temper is acted out in a a believable and appropriate manner. The supporting cast is good with noteworthy Ashlee Gillespie as Haley, who acts as the somewhat brighter note of the film. And Matthew Lawrence as the brother, who I recognize from my nineties childhood. On a visual standpoint Of Silence in flawless in cinematography. Scenes in blackness appear intentional and not because of misused lighting. And the set design is captured in a serene gloss that I personally care for as a visual palate. 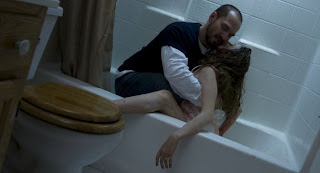 Outside of the strong technical structure there's also a lovely score that fit to the film perfectly. A defined and disturbed lullaby of sorts that I could recognize in an instant if played again. Not all may like Of Silence, as I said it's a cautious film that paces itself before any horror moment. Some may not personally like the surreal world Colby's life becomes as it fades in and out of memories, visions, and overall bizarre occurrences. Which is a weaker point in the film as it's often hard to decipher exactly what happened and what didn't. I hope to watch it again some day to maybe fill in some of the blanks that it left for me. It's also tending to characters before action, as your often more involved in Colby's state of dejection than the weird noises. But don't let it mislead, Of Silence is a stunning little film that I quite enjoyed. I'd watch again and I'd recommend as a watch for any slow burn horror fan.
Posted by Bleeding Dead at 7:48 PM
Email ThisBlogThis!Share to TwitterShare to FacebookShare to Pinterest
Labels: Monsters, Supernatural, Suspense, Thrillers, Visually Satisfying