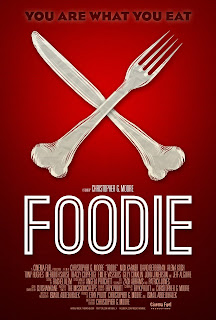 When Mueller gets invited to Kitchen X, an elite dinner party that only invites select members, his excitement is only matched to his avidity to food. As promised the dinner brings a unique experience unlike anything Mueller is prepared for, literally. Foodie is a quirky, albeit uneasy film about a food lover's nightmare. The thirty minute short could easily be an episode from Tales From the Crypt, or any horror anthology show for that matter, as it shares the same macabre sense of humor. It's almost like someones odd unbecoming nightmare as horrible things occur yet everyone is cheery, which makes it all the more unnerving. The gore is tended and used fittingly throughout the short, most effectively at the end.

Writers Eryk Pruitt and Christopher G. Moore use a couple of classic horror scenarios and build an original plot around them. Moore depicts the tone of the film without effort, intuit to the appropriate balance between the black humor and the horror. As well as divulging into the bizarre world of food lovers, capturing the language and mannerisms to fine detail. I really enjoyed the opening credits as it sets you up perfectly for what your about to see. The music was equally on key with the film as the original score and selected tracks are used to set you off. The set design though is a bit pallid in comparison to the oddity of the film and the cinematography as equally lacking. Not to attest that they're poor by any means but rather didn't have the level of creativity the other aspects of the film had. I'd easily recommend Foodie as a horror comedy watch, the premise should keep you interested and the end results isn't dissatisfying. You can purchase Foodie on DVD at the film's site, foodie-themovie.com.

If your interested in me viewing your short film please contact me at my email bleedingdead22@yahoo.com. But no more Twitter requests please, I tend to lose them after time.
Posted by Bleeding Dead at 12:40 PM
Email ThisBlogThis!Share to TwitterShare to FacebookShare to Pinterest
Labels: Black Comedy, Horror Comedy, Horror Shorts