As usual I'm posting this late but I was again surprised when I got a press release, and not from Skip. When I asked, after of course agreeing, I got this as a response: " I've been scouring the internet for every legitimate looking horror blog".  If I get 1000 followers I still doubt that I'll ever get use to that. Director/writer Josh Heisie offered to let me view upon completion which means another Horror Short for all of you. 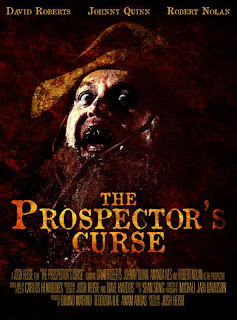 The Prospector’s Curse
February 19, 2012
A western-themed horror film entitled “The Prospector’s Curse” has wrapped production near the remote town of Ponty Pool, Ontario.  Set during the Klondike Gold Rush of the 1890’s, the darkly comedic short is Written and Directed by Josh Heisie (‘Mail Order Bride’), Produced by Bruno Marino (‘Anything Goes’) and is currently in Post Production in Toronto, Canada.
The talent lineup for “The Prospector’s Curse” includes David Roberts (‘Curious and Unusual Deaths’), Johnny Quinn (‘Mind’s Eye: The Series’), Amanda Ives (‘I Hate Toronto: A Love Story’) and Robert Nolan (‘Worm’).
Rounding out the creative team are Director of Photography Michael Jari Davidson (‘SICK’), and Special Effects Makeup Artist Carlos Henriques (‘Red: Werewolf Hunter’) of The Butcher Shop.
Tagline
There’s blood in them there hills!
Logline
The vengeful corpse of an old prospector haunts two gold thieves as they struggle for salvation.
Synopsis
Theodore “Tubby” Ellsworth and Jack smith are two criminals on the run, lost in the untamed wilderness.  When they stumble across a mutilated Prospector, dying on Indian ground, they promise to give him a Christian burial.  The fugitives break their oath and steal the old man’s gold…but that night, the Prospector’s corpse returns to make them pay!
Related Web Pages
Facebook Fan Page
Josh Heisie
Bruno Marino
Michael Jari Davidson
Carlos Henriques
Dave Roberts
Johnny Quinn
Robert Nolan
Amanda Ives
Posted by Bleeding Dead at 12:22 PM
Email ThisBlogThis!Share to TwitterShare to FacebookShare to Pinterest
Labels: Press Release

You had me at 'There's blood in them there hills!' Sounds great!