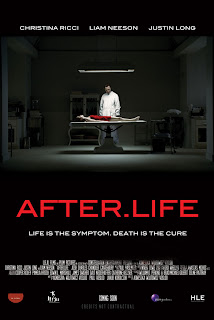 Anna's life has begun to fray as she seems to be a little lost in her job, relationship, and the generality of her life. As life is though it gives Anna no time to mend the broken and she dies in a car accident, leaving behind a grieving boyfriend. When she wakes up in the basement of a funeral home, being prepared by the funeral director Elliot, she's afraid and bemused by what's happening. Understandably addled, Elliot explains to Anna that this is what happens after a person dies and that he's been given a gift to speak to the dead to help them pass over. Anna can't leave the feeling though that she's not quite dead, despite an autopsy proving dead-on-sight to her car accident. Trying to convince her Elliot's only response is frustration and his only solution is for her is acceptance. Her boyfriend Paul however is also not convinced that Anna is gone and finds suspicious in Elliot's character. As Anna's funeral draws closer there is no indication as to what really happened to her, leaving you to question is Anna dead or alive?

The film does have genuine creepy moments but overall it suffers from a lack of intrigue. The characters are uninteresting, dully pulled by the happening and the mystery of Anna's death. Maybe it was just me but I felt that so much more time had passed than that suggested in the film. Anna had till Friday to get her after.life together, I believe which was only three days away, instead it felt like two weeks had passed. Also ridiculous was the use of CGI in unneeded scenes. In visual perception it wasn't quite as clear, there are shots of beauty and then shots of nothing special. A common thing I hate in films is when they try far too hard to create a color scheme and it's painfully obvious, here it isn't so vibrant but the noticeable color of red was throughout. It didn't compliment against the morticians green walls but overall it wasn't bad to look at. 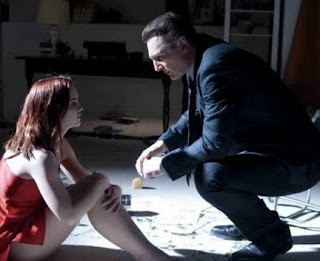 The script isn't bad and as said the concept has some weight to it, but falls flat and never really picks up. As does characters, most are just unlikable and account for nothing more than that. Christine Ricci plays out most of her role a la nude, a favorable asset to you male viewers I'm sure. She does what she can with the cold Anna and is consistently good throughout. Liam Neeson is the man to shine here though, his character is by far the most interesting, a little bi-polar and psychopathic with his very polite manner to the living and his low patients towards the dead. I wouldn't go as far to say he's creepy, more or less odd with his lurking at love ones saying goodbye and his ability to speak to the dead. Paul is prone to fits of alcoholism and crying, all understandable as he's really the only one appropriately mourning over Anna. Justin Long is fine in the role, he seems heartbroken enough, if not more so than those around him. 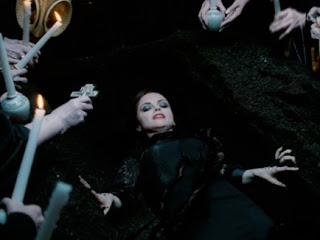 At the end it just feels useless. In doing research I peaked on the film's IMDB discussion board and there are rather intriguing opinions and analysis's of the film from fans as to what it all means. I even saw one in how this film could be a literal interpretation of how the brain dies slowly and what people really experience in near death experiences could be similar to Anna's story, or in likes too. But those still prove far more interesting than the film. I've also seen a few comparisons to another film of this supernatural thriller nature, Dead Awake, but the difference is Dead Awake is awful, where as this mostly just boring. Not my recommendation for a psychological thriller but it's not an entire waste neither.
Posted by Bleeding Dead at 7:02 PM
Email ThisBlogThis!Share to TwitterShare to FacebookShare to Pinterest
Labels: Psychological Thriller, Suspense, Thrillers

my name is sevé schelenz and i'm trying to get ahold of you by e-mail as i don't use twitter or facebook. i'm the writer/director of a psychological horror feature entitled "skew". jason over at "reviews from the basement" mentioned that you were interested in having a look at "skew" and possibly doing a review. please feel free to drop me an e-mail at sleepapneaprods@hotmail.com to chat. sorry to contact you through the comment section. please feel free to delete this. thanks and hope to chat soon.