Another press release. If Skip keeps sending me these people are going to start mistaking me for a legit writer. 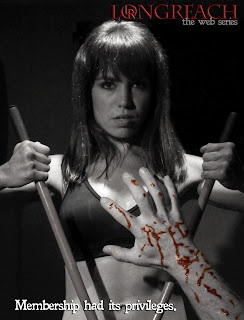 “Longreach” Sneak Peek Ready for Horror Fandom
MASSACHUSETTS (Feb. 18, 2012) –On the heels of critical acclaim and success of its Rondo Hatton Award nominated cult hit “Microcinema,” Harvest tide Productions today released a sneak peek of its upcoming horror web series “Longreach,” now in pre-production as it secures funding.
“‘Longreach’ is about a righteous society,” said writer-director William DeCoff. “Minus the behaviors of righteous men. We at Harvest Tide are very excited to bring horror fans quality web entertainment for a real thrill and a great value.”
The “Longreach” storyline follows the demise of widower Daniel Jedrek, the sergeant at arms for the New England chapter of the Longreach Association. Located on a small island off the coast of Massachusetts, it is the oldest chapter of the nefarious organization in North America. Longreach is ancient and worldwide—and extremely wealthy and charitable. Its members also eliminate society's undesirables by questionable means. In this story, Jedrek has been ordered to capture and deliver innocent people as prey to twisted Dawn Aiden, the wife of Reverend Aiden who is one of the leaders of the New England chapter. As he struggles with his conscience, Jedrek begins to slip further and further from reality while Reverend Aiden begins grooming Jedrek's 10-year-old son Sam to take his place under the suspicious eye of Jedrek's daughter Alecia.
The “Longreach” sneak peek stars Sarah Nicklin as Alecia Jedrek; William DeCoff as Daniel Jedrek; Emily King as Dawn Aiden: Skip Shea as Reverend Aiden; and Timmy DeCoff as Sam Jedrek; and features Jessica Sonneborn, Jenny Chen, Kachina Dechert and Peter Barbaro.
Harvest Tide Productions, founded by Skip Shea, William DeCoff, William Smyth and Emily King, produces and distributes quality entertainment content for targeted niche audiences and other ancillary products.
Longreach Sneak Peek Link - http://bit.ly/yW067p
Posted by Bleeding Dead at 1:35 PM
Email ThisBlogThis!Share to TwitterShare to FacebookShare to Pinterest
Labels: Press Release, Web Series