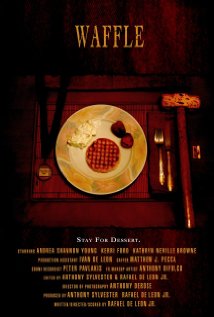 There's something a little off about Wendy, and it becomes apparent when her classmate and new friend Dana comes over to Wendy's house for dinner one night; her mother foul and overbearing and Wendy seemingly a psychopath. However not all madness is unprovoked and when the true nature of Dana's visit is revealed at dessert a horror of its own comes to life. I'm aware that the film only runs a few minutes in length but the plot seemed very one note, the characters not really, but as to why the reason Dana was at Wendy's house could of been adjusted to something a little bit more engaging or maybe something horrifying. Again the aim is to 'shock' the audiences, and it does, but a little forthcoming because you know there's something not right with Wendy. The concept is how at surface value and within a person there are truer more darker natures but it really just felt a bit bland for me.

I attest that the obtuse execution laid in the writing by De Leon Jr, who was fair as a director but tried a little too hard to create a disturbing use of dialogue. Acting also contributed to the dull script, a good portion of it being overacted, especially by Browne who played Wendy's mother. Even in the cover art the photography for Waffle is what I like the best, a very dark contrast of colors paired with this distorted strawberry pink creates a very nice visual piece of lighting to look at. Also by keeping the camera off Wendy's face for the majority of the film proved effective when a direct shot of her face is revealed, taking you back at the very least. Waffle isn't a horrible film by any means, nothing like Bunny Boy, but overall I found it to be a little dull and fairly mediocre. Not a waste of five minutes but not a need-to-see short film either.

You may follow the film on its blogspot and watch out for its appearances at film festivals around the world.

As a side note I'm running a little short on short films so if you have one you'd like me to review please email me at bleedingdead22@yahoo.com, or contact me by my twitter.
Posted by Bleeding Dead at 5:27 PM
Email ThisBlogThis!Share to TwitterShare to FacebookShare to Pinterest
Labels: Disturbing, Drama, Horror Shorts