May contain spoilers
I went with another Bava film for the second of Italian Horror reviews because I've been wanting to watch this for a while. Also while I don't care for the holiday February, among other things, is the month of love and I thought what no better than a bride murderer to bring in the spirit of Valentines Day? 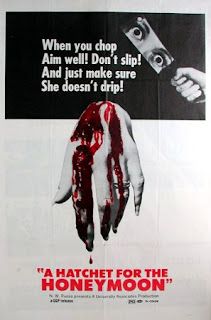 John Harrington is a wedding dress designer by day and moonlights as a serial killer of newly brides by night, and on occasion he'll kill their grooms as well. By each murder John is able to unveil a bit more of the mystery of his mother's murder, which he's blacked out for the most part and likely awoke the demon inside him. Though John is able to cure his urges with killing he struggles with another complication in his life, his wife Mildred. Mildred is a co-owner of the shop and refuses to give John a divorce, despite that she equally hates him. At the edge of his sanity John kills his wife in an attempt to put an end to her nagging. But Mildred will not leave so easily and starts to haunt John long after the murder. Even more intriguing is one of his new bridal gown models, who's been showing an interest in John. But with Mildred hanging around like a bad smell and the police zeroing in on the murders of the young brides his life is becoming more entangled in insanity than he could ever imagine.

John Harrington has very much a pre Patrick Bateman in his self-aware ritualistic murder. His monologue is not unlike Bateman's and the sexual kick he gets from killing virginal brides downed in the wedding dresses he makes, which also draws a reference from Norman Bates with the possible titillating fixation on his mother. I may be making Hatchet for the Honeymoon sound more in depth than it is, while Harrington is disturbed and the original title The Red Sign of Madness (Italian) proves more fitting the film wasn't as breaching as I had hoped. Not to attest that nothing holds interesting as the eloquent yet galling murder of one of the brides in the secret showroom is fantastic, at the least. Also as Santiago Moncada's script starts to ring a common tune of a theme murder he throws in a unique spin with the supernatural haunting of Harrington's wife. Which not only in itself turns on the Italian horror film but also the basic structure of the ghost story, meaning that I liked how everyone was able to see Mrs. Harrington but John himself. Unique and different for sure. 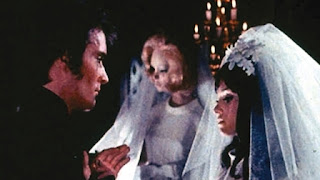 Stephen Forsyth is Harrington, and he's alright as far as acting goes but at surface value there's something about his dreamy, basically suave appearance that creates the insanity to his character. Maybe it's because you expect him more to play the James Bond type than the ravaging murder type. The rest of the cast is all lifeless as far as character development goes, with the exception of Laura Betti as Mildred. It's hard at times to judge an actor when the entire film is dubbed in a voice that doesn't fit the actor. As I felt with Betti, she's probably very good in the original Italian version but the voice in the English is 'off' and distracts her facial expressions. Of course Bava paints the film in a red cinematatic scope but a little flat actually next to his black and white masterpiece Black Sunday. Odd. Still lovely to look at, the makeup and costume design to the ghost wife in particular is capturing picture. 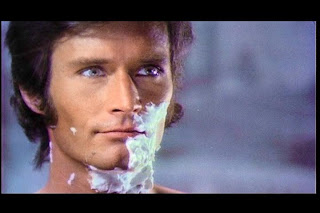 After that picture I'm fairly confident that Mary Harron drew inspiration in this film for American Psycho. I wonder if Bret Easton Ellis drew any inspiration from it though? This review feels a bit pretentious from my end, I apologize, but I'm only saying how I feel. I've noted all good qualities as the film is good but it still felt a bit average to me. Not really gory to compete with my favorites but not a bad watch. Bava is able to effectively capture the maddening sense of blurred reality and sure I'll say it, surrealism in John's actions and desires. But it's still just okay, and I have no idea why. As others I wouldn't recommend for those just becoming introduced to Bava, but rather as an average watch for a casual [horror] movie night.
Posted by Bleeding Dead at 6:30 PM
Email ThisBlogThis!Share to TwitterShare to FacebookShare to Pinterest
Labels: Italian Horror, Love Story From Hell, Mario Bava, Supernatural, Suspense

Thanks for the review! This is one of Bava's that I haven't seen...so I'll have to check it out.