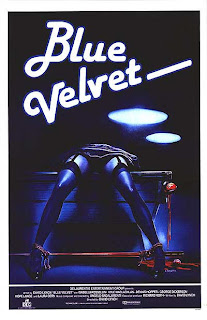 Jeffrey Beaumont has returned to his small suburbia home town to help out with his ill father. When he's walking home from the hospital one day he comes across a severed ear in a field. Being the proper raised college boy that Jeffrey is he takes the ear to the police in search of answers. But when the police reply with ambiguity and he realizes that they've been quiet about all they know he seeks out answers for himself. His romantic in the police chief's daughter Sandy leads him to Dorothoy Vallens apartment, a lounge singer who's dark secrets take Jeffrey on an erotic and dangerous journey to a man named Frank Boothe. However, Jefferey doesn't realize that he's no longer in his safe suburbia and has entered Frank's world, a dark place rooted with childhood trauma and wielded by a man with a short temper.

A arch in the psycho-sexual thriller from the preeminent director of the bizarre. Blue Velvet sets you off balance from the opening sequence of bright red roses against a white picket fence and ocean blue suburban sky as the cadences of "Blue Velvet" linger in the background. The uncanny temper is at play in the film's script, acting, and optics as there's nothing quite right in a David Lynch film, and the term Lynchian creates a genre of it's own. This is my first Lynch film to be quite honest, I'm familiar with the term Lynchian and know of Eraserhead and his series Twin Peaks (both on my list to watch), but this is the only actual exposure I've had. That being said I get it, he precede's logic and perceives the abnormal, but in ingenious way that it doesn't really qualify among other scripts that are driven by the macabre. The score to Blue Velvet is for, lack of a better phrase, the cherry on top of a deeply disturbed film. I could of done without the love music to Sandy and Jeffery's characters but the off-set rhythm to the score when Jeffrey leaves Dorothoy's apartment and of course the haunting flow of the title song "Blue Velvet" tightens an already tense halo. 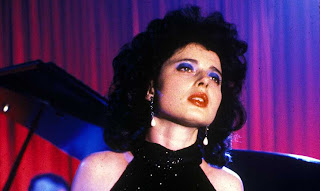 I don't care to think in absolutes as I believe that limits how I percieve things but if you're not bothered or intrigued by Dennis Hopper's performance you have no taste in acting, and are likely a sociopath. Hopper takes a risk and plays Frank Booth with an over the top performance but in that it feels so real, your under the belief that this man is undoubtfully delusional. There's a tinted hilarity in the portrayl as well which adds to the more unsettling nature of it. Kyle MacLachlan is awful, I'm sorry but his performance did not seem sublte, often he was stiff and monotonic as well as a little troubling, and not in a good way. He upset me with his leering stare and soft voice, maybe if he was playing a child molestor this would have been a good acting exploit but he's suppose to be the unsought out college hero. Isabella Rossalini is almost as delusional as Hopper in the lost sanity of Dorothy, you see the victim but also the disturbed woman that's taking over, as well as other layers. Complex photography intertwines with the plot to create a very delude sense of reality. The apartment scene is disquieting in it's unimaginable play out. Lynch takes the script and the viewer to a place absent of safety. 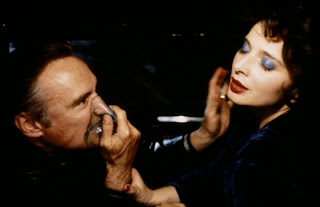 Execution in surrealism is hard and often falls to the absurd and unrealistic. Lynch knows surrealism likely better than he knows reality. Blue Velvet is weird but rhythmically strung with tension and moments to make you feel lost, as Dean Stockwell's lip syncing of In Dreams pulls you from the film. I was also a bit lost as to where to place this film, I almost wanted to say giallo but ill-fitting as even though Jeffrey goes about his own investigation there not enough blood or close ups of murder. Then I possibly thought Suburban Gothic but PissedOffGeek on twitter rebut that with his insightful depiction that though Jeffrey lives in Suburbia there's never any danger there, it's all in the urban constants of the apartment where the real horror occurs. Therefore all I can conclude is that the film doesn't fall under any category as it is a class of its own, hence Lynchian. Blue Velvet is an important cinematic piece that should be seen by not only horror lovers but film addicts as well. I was captivated and seduced by Lynch's use of medium and therefore loved it. It's unlike any viewing experience and commands that attention of being unique. Not everyone will like it per say but everyone needs to see it.
Posted by Bleeding Dead at 7:49 PM
Email ThisBlogThis!Share to TwitterShare to FacebookShare to Pinterest
Labels: David Lynch, Psycho-Sexual Thriller, Psychological Thriller, Suspense, Thrillers