To Be Evil Or Not to Be Evil, That is the Question

It's that wonderful time of year where I get sick. Like clockwork every October I'm plagued usually with the flu or a bad cold and this year didn't miss a beat. Due to this inconvenience I'm only now just getting this list to you as I've spent the last three days sleeping and drinking lots of cough medicine. Its the second Monday in October and keeping my word I have a new Top Five List for your viewing pleasure. But first I must again remind that I'm running a contest through the entire month of October that could win you a Blu Ray copy of Room 237. The details are here if you like to further inquire. I don't have any entries so you stand a fantastic chance of winning. The contest also gets your review posted on my blog and a chance to gain additional traffic to your blog.

This past February I was apart of Women in Horror month which was a month long celebration of the ladies of our genre. In that I kind of denied the men some love, but in fairness the horror genre is rather men dominant anyway. I'm here to make that up though as I like both sexes in film. However, it's too difficult to account all the harrowing men of a genre older than film itself and the honorable mentions list would go on forever. So I narrowed it by quite a margin by looking at our anti-hero's of the genre rather than the wholesome Superman type. Which is appropriate considering horror takes to the darker side of life anyways. Love them, hate them, or your never quite sure how to feel about them they are the ones you doubt usually up until the end, and maybe then some. They are the wayward heroes and the morally conflicted bad guys but in the end they always help save the day...or do they? Here are my Top Five Anti-Heroes in Horror (thus far):

I don't believe I've ever proclaimed my affliction for Ron Pearlman on this blog before. To put it simply I really like when Ron Pearlman gets a decent role because he's really great actor, especially when playing characters in two tones. His alter TV ego Clay Morrow on Son's of Anarchy is a perfect example of a character that is suppose to the good guy but likes to do the bad guy stuff more often than none. Its a seep from his part in Hellboy where he plays the title character. If you don't know the back-story Hellboy is the son of the devil and like any anti-christ his intention on this earth is to eventually release the apocalypse. Close to being raised by Nazis he was instead founded by the Bureau of Paranormal Research and Defense and spends his life fighting off the things that go bump in the night. Hellboy's purpose, motive, and methods are often questioned, especially by his superior, but makes a case to keep the human race safe, even risking all he holds close to do it. His uncertainty in his self though and the sobering sureness of others that his real destiny will be full-filled one day makes you curious for Del Toro's next installment. The big red guy is a good guy no doubt, but he still has room to fall.

Among other reason as to why I love Rodriguez's vampire flick so much is Seth Gecko turns out to be our unlikely anti-hero. Of course with the charm of George Clooney and Tarantino's script it wasn't hard to like a character who made a career of being an asshole but still had a little bit of softness in his heart, somewhere. Seth is a no nonsense do-as-I-say-or-enjoy-this-bullet kind of guy but his tender spot for his brother and his somewhat sparing pass for the innocent give him dimension. As it is not everything is black and white, there are shades of gray and though his tone may be darker then other's he's not completely void of emotion. When his brother and him hijack a family and their motor home to get across the border (all to escape an astonishing trail of blood and bodies) they become unlikely allies when their lives and eternal souls are put to risk in a biker bar full of vampires. But before him and Kate become vampire slayers Seth shows his level headed side when he tells Jacob that he won't kill his family as long as his brother and him escape safely. He also had full intent of letting the bank teller lady at the beginning go, but that goes sideways for other reasons. It is hard to say if Seth has changed come the end of the film but what matters is he pulled through for the family in the end (to the best of his ability at least), despite that they would have never been there if it wasn't for him.

Anthony Burgess novel and Stanley Kubrick's adaption of delinquent Alex DeLarge is a study of anti-heroism in its prominent impression of curing a criminal. Burgess paints a detailed picture of a future society where young Alex spends his free time drinking drugged milk, trotting along his gang of Droogies, and performing illicit acts of violence and rape. When a break in goes wrong and Alex accidentally murders a woman he's taken to jail where he learns of a program in which he can volunteer for that would in turn cure him of his internal desire for violence. The experiment a controversial approach that wasn't thought all the way through only really stops the act itself but doesn't really cure the criminal, as delinquent Alex still lies somewhere beneath his new presentable exterior. Alex is appalling, the most infamous act of his being raping a wife in front of her husband all while merrily singing Singing in the Rain. But at a point Alex eventually becomes the victim, tortured by his love of Beethoven through the unbearable stomach pains caused by the experiment. Also forgotten by his family and a easy prey for his Droogies-turned-cops the second half of the film actually has you sympathizing with a character who made a solid case of deserving a warm and cozy spot in hell in the first half. Maybe its because despite the real urge still lurking beneath the surface Alex truly believes he's cured and attempts to make amends. Unfortunately for Alex he already made his bed and the rest of the world has full intent on him sleeping in it. 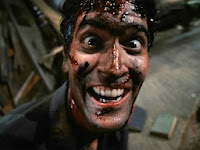 Ash is the unsung hero of the Book of the Dead, having saved us in three films now from the Necrononmicon's demons. Ash's paragon isn't so much a inner struggle between good and evil, I don't really recall Ash being bad to any sorts (possession does not count). He's more of an anti hero in that he embodies none of the traditional traits of a hero but still saves the day in his own groovy fashion. His sanity is a question as his mind does slip, understandably, a little from reality once his hand is claimed by the demons and he's not really the romantic Weastly type (the 'pillow talk' line in Army of Darkness is classic). But Ash's job is to kick ass and chew bubble gum, not save the Princess from the castle. And despite that being a John Carpenter film reference that has nothing to do with Evil Dead II its the basic truth. Ash is good at losing his mind, slaying deadites, and wielding a chainsaw from his missing limb. He was born to kill demons and the idealistic souffle that comes with heroes has nothing to do with it.

Let's not deny that there is no one better at straying the lines of good and madness as well as Vincent Price, who basically built a career by being the weird guy in the corner your never quite sure about. And sure this is a character list and Vincent Price is technically a real person but how could I narrow down to a single character? House on Haunted Hill, The Abominable Dr Phibes, The Fall of the House of Usher, The Masque of Red Death. there's so many to pick from. The man was the true incarnation of the anti-hero as your were often unsure but you always routed for him, or at the least highly fascinated in his character motives. But to pick for the sake of this list I'm most partial to his performance in House of Wax, as it is my favorite Price film. His play as passionate and outré sculptor Henry Jarrod is a a fantastic display as he just casually lets slip that he's not even relatively there. Price had a charm that was easily captured on film and no matter what the character or film he was the hero of many horror fans. He was the true incarnation of the anti-hero of our genre as he was the best at capturing it.

If you're reading post your own.
Posted by Bleeding Dead at 10:01 AM
Email ThisBlogThis!Share to TwitterShare to FacebookShare to Pinterest
Labels: anti-hero, Top Five Lists, Vincent Price