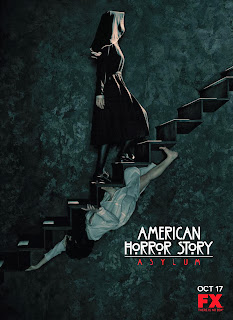 In modern day a young newlywed couple, taking a haunted honeymoon tour around the country, comes to Briarcliff, an old insane asylum that reached its peak of weird in the sixties, its most famous patient a violent serial killer called Bloody Face. Not too long after arriving the couple is killed by an unseen force and we are flash-backed to the sixties where we see Briarcliff in its day. Not too different than its current proceedings it is a grimy patient care facility that is supervised by the cruel Sister Jude and run by Rome driven Monsignor Timothy Howard. Of its newly recent patients there's Kit Walker, a twenty some year old average Joe who's wife was brutally murdered by the unknown killer Bloody Face. Mistaken for her murderer Kit is thrown into Briarcliff and is committed as he claims aliens abducted him then killed his wife Alma. With his face now being the poster child of the violent crimes where the killer has been skinning the women he captures and wearing their skin as a mask Kit's arrest attracts Lana Winters to Briarcliff. A journalist Lana has all the right girth as a reporter who'll do anything to get her story but her nosing in Briarcliff and its conditions lands her a bed in the hospital, her condition symptom by Sister Jude of her interest in the same sex. Inside Briarcliff Kit and Lana are exposed to the often inhumane treatments and unsanitary living conditions the hospital offers. Not to mention its sometimes mid-evil practices for punishment. The only option the two have is to prove their innocence as the real Bloody Face killer is still lurking around. But along the way they have other horrors to triumph over which include Sister Mary Eunice who's purity is left dead inside her by a malevolent demon and Briarcliff's own residing doctor, Doctor Arden, who's experiments and history bring a whole new shade of evil to the patients. 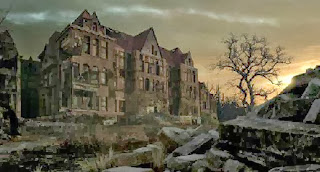 As last year the metaphoric horror was dealing with the ghosts of the past this season played a more rising from the fall as survivors were made in the tender walls of Briarcliff.  Conscious of its time AHS: Asylum tackles the issues of woman's oppression, Civil Rights movement, and the deeply misconceived understanding of mental health. Each of its vivacious characters represent a different struggle all of which seek the same outcome for freedom, independence, and choice. The horror likely more present this season with the works of mutated zombies, Nazi doctors, aliens, a murderous Santa Claws, mean nuns (and possessed, mind you), and a serial killer who's fond of the work of Buffalo Bill to add to a list of things that might keep you up at night. The Bloody Face mask is a brutal conception from the makeup and special effects department. A vivid, ruthless imagining of a more than deeply unhinged killer and his prominent work. Lets just say Leatherface would be proud. There's a natural uneasiness of mental institutions as the real life horrors of mental illness are often the darkest and most grieving to watch giving Asylum a perch above the prior season's location. Also an improvement from last year is a more guided direction where the story arcs actually sought out a conclusion, for the most part at least. There are inconsistencies that don't pose fatal to the tack of the show but are weird plot motions such as Alma's final years and Dr. Arden's last act. The latter maybe not odd but more of a disappointing end to a well built deleterious villain. The composure at the end of the season is really quite lovely though, for a show that often doesn't know where it's going it manages to tie up things in a quiet but significant end that changes the perception of the show. Another happy ending with the remnants of dread still looming beneath the surface. 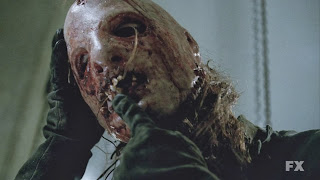 Evan Peter's Kit Walker is about as opposite as it gets to Tate Langdon, a hard working man who's aim in life is to live a happy one with his wife loses everything in a single night to otherworldly beings. Peter's is a good actor and is good in the part, his accent, appearance, and matured performance all strong, but Kit's story falls a little bit short to some of the other dealings going on at Briarcliff. While its still an interesting story line and ends in an unsettling yet somehow comforting finish, it differs from the tone for the rest of the season. Of all the stories I enjoyed Lana's the most as it showed a strong uprising from a character who was initially strong to start with but was shattered when she lost everything in the asylum and all her strength is put to the test. Sarah Paulson is fantastic in the part with the heart and spirit of the time evident in the character. Lana can be forceful and she does her fair share of questionable things but Paulson plays the ups and downs with no problem and keeps the character at a constant and likable. Jessica Lange's Sister Jude also an unexpected tale of triumph and demons as initially she's portrayed as the 'bad guy', so to speak, having wrongly committed Lana so she wouldn't expose the truth that lurked behind Briarcliff's walls. Not to mention her always pleasant collection of whips. But as the show progresses we see Jude in a time before she joined the convent and the spirit that follows her around. Her tough exterior is not only a cover up for a very broken individual but her strongest asset against her work enemy, Doctor Arden, who often sees to undermine her authority as he considers her nothing more than a woman. Lange is a force in the part but it lacks the same punch of her performance in the first season. 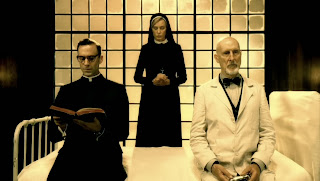 Past season favorites Lily Rabe and Zachary Quinto return with genuine performances that account for a lot of the fear instilled within the episodes. Frances Conroy also rejoins the cast as The Dark Angel of the season, having a significantly smaller role but managing to steal most every scene she appears in. AHS still utilizes a very defined and seamless display of cinematography, choosing a darker palate this year to tone the melancholy of the asylum. The production also again consistently strong and attentive to detail. There's a far deal more I could say about the second season of FX's prominent new show but this particular review has carried on long enough. Murphy and Falchuk can simply be brilliant, as was evident last year. AHS is different, unlike any show horror and non to be present on TV, and with more cohesion in their telecasts this year its made its mark. Like its first season American Horror Story: Asylum is riddled with exceptional acting, strange and addictive horror, a strong finish, and unsurpassed writing. With only two eras and two types of locations covered there's endless possibilities for this show that has a love for all types of horror and makes a regular effort to pay homage of past films. Last year I was unsure, albeit addicted, about the overall composure of the show. This year I'm purely addicted. To put it simply if you are a horror fan and your not watching American Horror Story your missing out on some of the best the genre has to offer.
Posted by Bleeding Dead at 11:26 AM
Email ThisBlogThis!Share to TwitterShare to FacebookShare to Pinterest
Labels: alien invasion, Drama, Gritty, Insanity/Maddness, Possession, Psychological Thriller, Satanic, TV Show, Zombies