***If you'd like to skip my rantings, which consists of the first three paragraphs in this post, scroll below to go straight to rules and details of the contest. 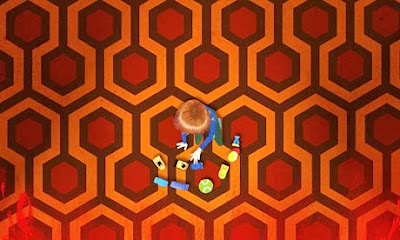 Recently I purchased a copy of Room 237 on Blu Ray by mistake. I wanted the DVD as I'm really interested in seeing the documentary that reads between the lines (and then some, from what I've heard) about Kubricks horror classic but picked up the Blu Ray by accident. When I went to return it to store I was denied. Their reasons being that it was first off brand new and they didn't accept returns on new films and also because I opened it out of the package. They gave me two options, switch it out for the DVD or sell it back to them for eight bucks (a really take it up the ass deal, excuse my language, considering I purchased it from them for three times that worth). The DVD sounds like the appealing option right? If only Netflix didn't put it up the day after I bought it. Now I'd like to watch it before I decide if I want to add it to my collection. Since I'm just indecisive like that.

So I'm left with this useless Blu Ray copy as I don't own a Blu Ray. I could sell it to another trades store but its rather out of my way and I may not get much more for it. I could sell it online but again at most I could gain ten dollars more in profit than what they offered to me. And since I'm feeling generous and it massive horror movie watching month and I'd like to stick it to that DVD store I purchased it from with Karma I've decided it'll have better use in the hands of one of my readers. But I'm not just going to give it away, that would be absurd. So contest time.

In the past the contests on this blog have more or less failed with my first gaining all of four entries and my last generating a single entry with the winning recipient never claiming his prize. I'm not really sure how to go about fixing this problem. I've used Promote Horror in the past to help get the word out but still I'm rather unlucky when it comes to this aspect of the blogging community. Maybe my contests aren't all that appealing or maybe the prizes have been less than motivating. I hope this time I see at least more than four entries as the prize is good and the contest fairly simple.

CONTEST RULES AND OTHER STUFF YOU NEED TO KNOW:

- Write a review for the 1980's classic horror film The Shining.
- Review will be judged by me and winner will be picked from the content and strength of the review.
-There's no good or bad opinion, love or hate the film it will be based on how well your point is argued and how adequately you present your opinion.
- Indifferent to length. It can range from a single sentence to an essay, but I'm much rather prefer something in the middle such as three to four paragraphs.
- You have until October 30th to submit you review.
- Submit ALL reviews to bleedingdead22@yahoo.com with the subject line Room 237 Contest or Shining Contest, or something of the likes. Just please don't leave it blank.

WHAT YOU GET FOR BEING AWESOME AND WINNING:

- Brand New Room 237 Blu Ray.
- Your review posted on my site on Halloween as a special guest review.
- A chance to promote your own site to gain traffic.

Posted by Bleeding Dead at 9:42 PM
Email ThisBlogThis!Share to TwitterShare to FacebookShare to Pinterest
Labels: Contest