Not often do my reviews matter much as, lets be honest, I'm reviewing older films that no one cares about from my recommendation standpoint. Not to mention my reviews aren't the strongest. But every so often I'm blessed to see smaller independent films and for some reason the filmmakers actually like what I have to say. Rufus Chaffee came to me a few months ago and asked me to write a review about his film The Muse. I did, having enjoyed it, I was happy for the viewing and left it at that. I never expected that my review would be quoted, yes QUOTED, on the main poster. From that I'll always be grateful to him and if this little blog goes no further than it is now I'm content with just having this.

But that isn't the reason for this lovely post on Irrelevant Post Friday. It's because The Muse is finally available to view on Twistflix. 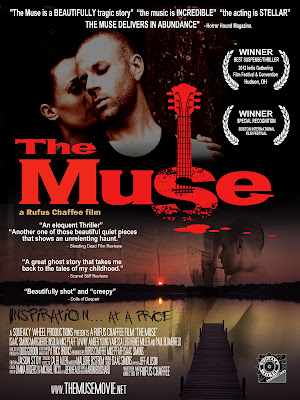 THE MUSE is waiting! Now available for streaming, download & purchase. Winner Best Film, Director and Actor at the Indie Gathering Film Festival, The Muse tells the story of one hit wonder musician Addison Taylor as he battles both writers block and a strange inspirational force at a secluded lake house. Blending chills, thrills and amazing original music, it has been called both "an eloquent thriller" by Bleeding Dead Reviews and "beautifully tragic" by Horror Hound Magazine . Check out the website at www.themusemovie.net and see it for yourself at www.twistflix.com/

Here's the Twistflix link and the film is also available for purchase and for digitial download on the site. It's only three dollars for a rent and it is worth it. My review of the film is here, if you need be reminded of how stunning I thought this little film was. I wish Chaffee all the best and I hope his film and future films get the attention they deserve. But that can only happen if you pay to watch the film, so please do.
Posted by Bleeding Dead at 9:04 AM
Email ThisBlogThis!Share to TwitterShare to FacebookShare to Pinterest
Labels: Press Release