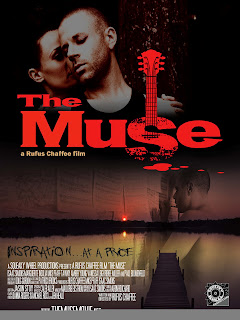 Addison Taylor is a one hit wonder who's been secluded in his song writing for the past three years. Overdue by the record companies standards Addison neglect of writing a song strung with poetic rhythm and a general sense of being good steams from the excessive one night stands and pill addiction he's been living in. Spilling his insecurities on air it's clear Addison has developed an acute paranoia lead by depression from the pressure to be better. A deadline nearing his manager, Jimmy, suggests that he stay a few weeks at a cabin on Granite Lake and find himself and his music again. The lake house strums more than asked for though as it draws severe influence to Addison but also unsettles. When a beautiful women begins to appear in Addison's vision he finds the muse he's been searching for. But behind the beauty of his muse a dark past and sinister agenda lie. Obsessed with immortality in his music and intoxicated in his muse, Addison becomes lost in inspiration and a slave to her.

I've again been blessed to have been offered to watch a film before it's distribution, how I've been so lucky is beyond me but I'll always be thankful. The Muse is another one of those beautiful quiet pieces that shows an unrelenting haunt. Emotionally deep in the loss of oneself in music it's a unique rock horror that differs from the typical expectant of the small sub-genre. It takes much more to a indie flow paired with the build of a psychological thriller rather than something like Rob Zombie's rock horror films that have loud music and the raw grit (don't mistake, I love both kinds). The story structure could have been better built, Oliva almost appeared out of nowhere and it can be very easy to get lost if not paying attention. But overall a well composed cadence of the ghost story. I'm always impressed when director and set crew alike are able to draw emotion from inanimate object. The old guitar that seduces Addison has an enigmatic air to it, attribute to the scratches on its facial and director Rufus Chaffee's still shots of it.

Isaac Simons takes to your attention as Addison, he carries most of the film on his performance as often he's alone. As mentioned in the synopsis that Addison isn't really all the way there, he's paranoid and in a deep depression. Impressive as he also did the music for the film. Marguerite Insolia reminds me of Jenny Spain in Deadgirl for their similar usage of unconventional facial features. As much of an insult as that may sound its not as she has a unqiue beauty that is able to twist into an uncanny aura when she comes on to screen. Rene Miller fades in an out as Frances but she's still good and its clear she's a veteran actor. As I was told before hand the film is not in full completion as it has a few touch ups before release, one of these is color correction. DP Doug Gordon has a good sense of capturing images for the film, and really quite exceptional for being his first feature film. Chaffee also directs and captures his set location beautifully, as you really become immersed in the lake.

As you can tell I really did like The Muse, in fact I think I actually loved The Muse. The film doesn't really feel like a horror film from it's start, and in actuality continues to do so for a good portion of the time, substituting humor and music instead. However when it does climax to it's psychological build it proves unsettling in nature. I didn't get to see the film in full completion but for the most part what I saw stands. I ignorantly told the director when he asked me to do the review that the temporary use of music was irrelevant to me as I don't pay attention to that. This is dumb considering the film is about music and I would of liked to have heard the finish product to complete the film, but that's just an excuse to watch it again. Aside from my small nit picks The Muse is a real lovely film. An eloquent thriller that is undoubtedly to impress those who revel in psychological horror.
Posted by Bleeding Dead at 7:45 PM
Email ThisBlogThis!Share to TwitterShare to FacebookShare to Pinterest
Labels: Drama, Ghosts, Love Story From Hell, Psychological Thriller, Supernatural

I never heard of this before but I'm always willing to check out a thriller!

You defiantly should. Here's the film's website http://www.themusemovie.net/ so you can see when it'll be at a festival or become available to view.