I strongly dislike this review. More so than you could imagine. But there's not much I may do, it's still shit as much as I tried to edit it. This review may have not been meant to be as I watched another film first (Parents with Randy Quaid). After not being able to write anything on that I went to this to find myself with the same problem. At that point though it was more than three weeks and I needed a review so here it is, in all it's horrid prose. EXPECT, as in don't let me get away with not posting for a month, another retro review in two weeks. 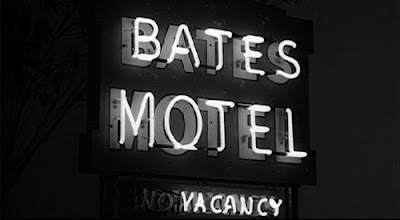 "The tight script offers a tense thriller that keeps you guessing as to who's behind the strange happenings at the Bate's house. Unlike most those it wasn't lucid, as opposed to most eighties horror where you can espy the murder five minutes into the film. It's not immune to all bad eighties decesions though as I could tell, not being a psychitrist, that having Norman move back to his mother's house was more or less a very poor decision. "
As it goes you may read the rest of the review here.
Posted by Bleeding Dead at 10:58 AM
Email ThisBlogThis!Share to TwitterShare to FacebookShare to Pinterest
Labels: TDHorror Retro Review