Happy Follow Friday and I'm not dead. I'm aware that I've not only been more horrible about posting than usual but I've also been horrible about Follow Friday. I just fell a little bit behind this month. I'm sorry, I would like to promise that I'll be more committed from here on out but if that doesn't happen than I'll have lied to you on top of not doing it. Therefore just know that I have full intent to do so but it may not happen. But I will try, I'm watching three films this weekend, hopefully four.

Besides that it's Irrelevant Post Friday and I thought I'd share with you my fears. Not in a horror film related sense but in an actual real life fear. There's three that are consistent and always anxiety provoking. And of course they are all irrational. 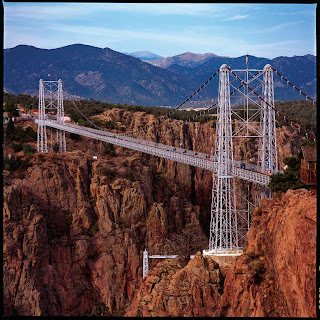 I'm not even afraid of heights per say but this bridge I find rather upsetting. I went here once as a kid and not only do they allow cars to drive over the bridge while you walk but there really is nothing stopping anyone from running up behind me and throwing me over the side of it. This is a reoccurring thought I had a child which would keep me up a night. It's irrational, why would anyone want to throw a ten year old over a bridge? Who knows but it upsets me. 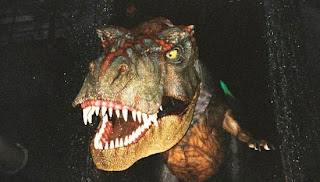 It makes absolutely no sense, I know. More logically the ones that move should prove more fear as they resemble more realism, but no it's only when they are still that I start to lose it. In particular the animatronic T-rex on the Jurassic Park Ride at Universal Studios. If it ever broke down when I was in it I'd probably cry. Just looking for pictures of this thing my phone vibrated and I about pissed myself and flew out of my seat. It simply just freaks me out. 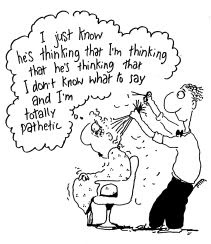 There's clearly something wrong with my wiring, not only do I seek out to be afraid being an avid horror lover as I am but my real life fear is something I come in contact with DAILY, forcing me to induce fear often. It's likely the most irrational fear of them all but I argue that if you can be afraid of something you drink (water) or spiders than I'm entitled to be afraid of people. People are much more capable of hurting you than a spider, physically or worse emotionally. I'm a social-phobic to the extent of having Social Anxiety Disorder, which includes a lot of strange fears like public restrooms but also the common public speaking. That cartoon picture is scarily acurate, that's every thought, with every person, all day. I'm don't have it as bad as some do, I leave the house, but I do have bad anxiety from it and if the situation proves so I can go into an anxiety attack.

If you are reading post your own irrational fears. Or rational.
Posted by Bleeding Dead at 10:17 AM
Email ThisBlogThis!Share to TwitterShare to FacebookShare to Pinterest
Labels: Irrelevant, Real Life Horror