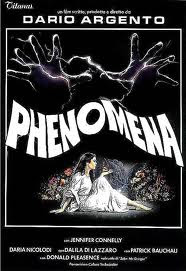 Phenomena is about Jennifer, the precocious daughter of a famous actor, recently sent to a Swiss boarding school. Upon arriving Jennifer is introduced to a few things the first being torment by her classmates who are more or less jealous of her father and put off by her odd love of bugs, and the second that a killer has been lurking the school for months. The mysterious murder preys on the young female students and has remained anonymous entirely to the police. When Jennifer sleep walks one night and is witness to one of the murders she ends up at a Dr. John McGregor, an entomologist, house with his pet and friend monkey Inga. Instantly McGregor takes a liking to Jennifer as they both have a love of insects in common but McGregor also notices her unique ability to handle them. Suspecting that Jennifer is able to telepathically communicate with bugs is proven true when she summons them to her school. With her new gift Jennifer may be able to solve the murders but it doesn't exclude putting her life in danger.

Insanity at it's best we have a crazy plot but with a much more mature director, especially at the beginning. A visual forepart of Swiss alps scenery, and in particular a waterfall, make this the 'nature version' of the Argento deaths. Often I felt the 'I've seen this girl's head fall through a glass window before' but got over it as I got way that our killer was rather keen on impalement and decapitation. Jennifer's sleep walking visions are intensely effective and appear almost nightmarish for the viewer. Often the sub-plots hit dead ends throughout the story and some things that occur in the beginning didn't connect to the end. The film falls apart in the latter half, and I preferred the story buildup to the absurd climax, but I had fun there too. A monkey wielding a straight razor is not a bad day in my opinion. 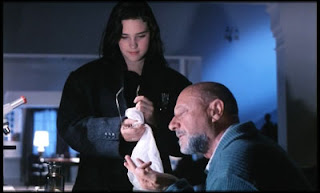 Jennifer's personality becomes a little high strong as the film progresses but still holds a likeability that's usually not allotted to her type of character which appeals directly in her being different. This is one of Jennifer Connolly's first roles and it displays her as a mature actress at her age. Donald Pleasence is the entomologist who helps Jennifer and alone steals the film with his quiet but great performance. I really did like his character and I was sad when he died. Unlike a lot of his works the film isn't enriched with a tantalizing blue and reds, instead we are treated to a more green scope of nature with the choice of scenary. And of course the deaths are as up close and personal as ever. I labeled this as Argento's heavy metal rock film of the eighties, an odd yet somehow brilliant combination I did not believe could exist. The film blares loud chords of rock music and in it makes itself much younger, maybe to appeal to the slasher teen audience of the eighties. 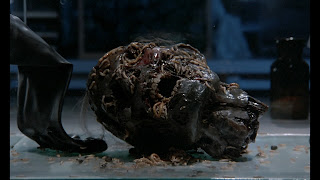 Phenomena doesn't really care that it doesn't make sense or that it leaves near dead plots, it's just a usual Argento; great soundtrack, great visuals, and interesting deaths. There's of course the inevitable similarities between it and Suspiria, but really only in plot. The two girls are Americans who go to a boarding school run by strict women but other than that the two scenarios vary greatly. Suzy is naive and doesn't do that much to get out of her situation where Jennifer is constantly pushing and has an ability above the typical final girl unfortunate. After seeing this its not hard to conclude what scares the director, in common theme I feel that boarding schools with strict cruel headmasters (Suspiria, Phenomena), and faces with distorted features that expose buck baby teeth (Phenomena, Deep Red) give him quite a scare. Or at least what he attributes to be the most effective. Either or Phenomena is a fabulously absurd eighties horror film, for any fan of Argento or for those looking for a light on the camp and high on the strange film.
Posted by Bleeding Dead at 9:24 PM
Email ThisBlogThis!Share to TwitterShare to FacebookShare to Pinterest
Labels: Bloody, Cult Horror, Dario Argento, Foreign, Masters of Horror

Fantastic write-up :). I'm always happy to see a positive review for PHENOMENA. This is my personal favorite from Argento, and I thought the last 30 minutes to this wonderful film are some of the best that a horror movie can offer.

Phenomena is actually one of my favorite Argento's too. I may actually like it more than Deep Red if I didn't appreciate Deep Red for it being the text book of giallo horrors.