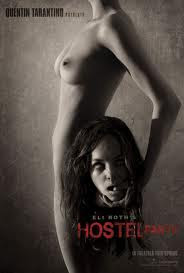 Hostel: Part II takes to the feminine side of horror as three young college students are in Europe studying art. When a luring women convinces them to take a detour to a Hostel in Slovakia the girls are exposed to the true hidden horrors of traveling in Europe these days. As the ladies are having fun, unknowingly being preyed on, two business men, Stuart and Todd, have just joined the elite hunting club in which the torture business runs out of. As Todd is eager and ready for the game, Stuart is having second thoughts and is hesitant towards his new purchase. When the business men and the girls finally meet it amounts to a bloody climax, but not all is the same in Eli Roth's sequel as our leading lady, Beth, has an advantage that may save her life.

My opinion on the first Hostel was that it was good, I don't like it because, well, you can't really like Hostel. It's about torturing people, but overall I found it to be a good horror film and more importantly I had to close my eyes for a second viewing. This time Roth gives us answers to questions that may have been posed by fans of the first film, such as what happens if you back out part way, and expands on the Elite Hunting's business end. It succeeds in being different to it's predecessor, despite having the same outline the girls are lured in differently and we get to see the setup process much more, in likes to where the business men stay. The script really only seemed to be touching at surface value to the stories though, between the three girls and the two business men. No doubt a good portion of the fan base will notice a real lack of torture, for better or worse. I didn't cringe or halfheartedly close my eyes as I did so in the first but was able to sit though it all with no effort for the most part. Though they have disturbing moments nothing quite compares to the gross splurge Roth done on the first. Suspense is limited in that you know the drill as the first time around. However it does flesh out a bit on the literal term of 'torture porn' and explores more of the fantasy that appeals to those who join the Elite Hunting. 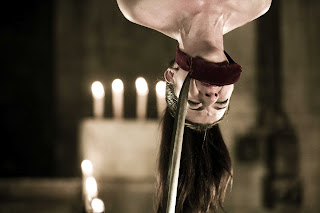 I'm sadden and enthralled that Jay Hernandez came back as Paxton. Small spoiler alert, though doubtful since you see it coming the second he's on screen, I wish he hadn't of died. I liked him and his character. I struggle a bit with Heather Matarazzo, maybe it's because I know her more as a comedy actress but her death was horrid and the scene of the film, also she was rather nice and it's always sad when nice people like that have gruesome deaths. Lauren German is good as the lead female and carries her part in the film well, and Bijou Phillips slips into a common best friend character, with little to no effect. The weakest performances are likely from Roger Bart and Richard Burgi, who try too hard and end up overacting for their dramatic moments, Burgi trying to mimic Rick Hoffman's performance in the first Hostel. I liked the camera and photography of the first film, nothing exceptional but good overall, but I love the work in this. The hot springs scene, among others, has a haunted beauty to it that I appreciate. And of course for the latter half there's enough grim to create that singed atmosphere for the torture. 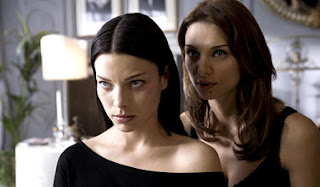 At the end Hostel: Part II is fine but it's not special, at most not a bad sequel but generally forgettable as a horror film. The ending was amped to please the audience even more so than the first though it was a bit campy. The first Hostel is noted for really defining the torture porn sub-genre, which in later years will be accredited like the slasher, in my opinion at least. The film also lost a bit of weight in any meaning it had, your less appalled this time by at what humans are capable of doing to one another; I personally found myself more interested in how Beth was going to escape with all that crazy security system they've improved on. I'll accredit the horror to being mostly in the idea that 'they are all around you' more so than the actual torture part itself. In that Hostel: Part II is an easy enough horror film to watch, still not for the light weights but I doubt you'll lose too much sleep over it.
Posted by Bleeding Dead at 7:49 PM
Email ThisBlogThis!Share to TwitterShare to FacebookShare to Pinterest
Labels: Bloody, Eli Roth, Torture

How do I submit a film for review? My feature film THE MUSE is nearing completion and I'd love to have some early reviews to circulate. rufus02144@gmail.com
www.themusemovie.net
I would have emailed you directly but couldn't find another way to contact you.