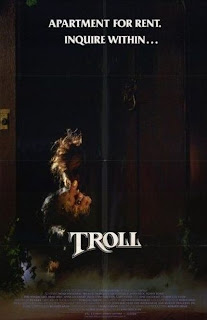 Troll follows the story of it's title character, Torok, a centuries old troll/fairy that's out to create an entire fairy universe inside the constrictions of an apartment complex. With the help of Wendy Anne Potter, the cute little girl to the family that just moved in down stairs, Torok believes he's finally going to rule in the human world. Once in Wendy Anne's body Torok goes door to door and using his nifty ring creates an Eden for his friends. But not everyone is blind to Wendy's new behavior, her brother, Harry Jr, see's that there's something wrong with his sister and with a little help from the witch who lives upstairs, he's out to save his sister and the world. The 1986 B-horror film has been hiding in its sequels cult shadow for years, forgotten by such infamy the original film proves to actually be decent and entertaining.
In a lot of ways Troll is almost a horror movie to a kid, but at the same time the second layer plot might go over their heads. The fairy-tale aspect and the lack of deaths might appeal to that sort of audience more than an adult, unless of course your nostalgic. The whimsical nature to Troll is equally paired with an undeniable quality, its humor, some intentional, but lets be honest most not. The name of the dad, Harry Potter, a writer who gets thrown into a world of witches and trolls? It almost feels like its satirizing J.K. Rowling novels but that's impossible since it predates it by 11 years. The trolls themselves while creepy are also laughable, especially when they sing. No blood, mostly people oddly running into each other at all times, the Troll kicking people three times his size asses, and pod like things that look more like they belong in gardens than as some violent alien spawn types. 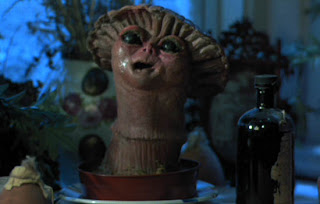 The characters, to my deep surprise, were developed. Between Eunice, the old soul who seems to have a gleeful tinge to her expression every time she talks about the trolls, to Malcolm, the dying little person who's humble disposition about his life made you root for him and his survival. Harry Potter Sr. was gloriously lame, from his pitiful attempt at a pre pregnancy drug joke to his horrendous dancing. In fact lets just lump Anne Potter in that category as well, her undeniable love for her husband and her mom duties put her in line with Mr. Potter, but its all in a good way. They are hilarious together, the scene where Malcolm is telling the Fairy Princess story at the dinner table and Mr. Potter looks over at Mrs. Potter and lovingly grabs her hand, I had a good laugh on that one. Beyond cheesy. 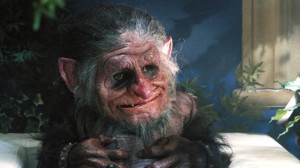 Troll is not all laughs though, the story is interesting and if Ghoulies or Leprechaun scared you then I have no doubt Torok the Troll will keep you up for at least one night. This film doesn't get a lot of credit because Troll 2 is the ultimate so "bad it's good movie". I really like Troll, I laughed through a good portion of it and although it may not have exactly worked I give the screenwriters credit for at least attempting a serious film, I mentioned it earlier but I'd say its plot jumped a second layer. I own the Troll/Troll 2 double feature and it was a decent purchase, in my opinion. Troll's a good B-movie to watch or maybe for a little bit older kids who won't get too scared.
Posted by Bleeding Dead at 8:32 PM
Email ThisBlogThis!Share to TwitterShare to FacebookShare to Pinterest
Labels: B-movie, Monsters