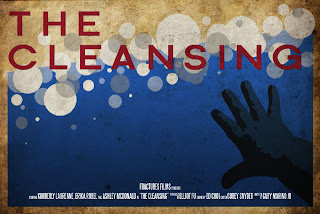 Initially I didn't set to do these on a weekly basis as I do not have access to enough short films to cover fifty two viewings, if not more. Therefore I hadn't anticipated a horror short review for you this lovely Sunday night but was led to a viewing of The Cleansing and decisively changed my mind, as of twenty some odd hours ago. As usual I pose caution towards raw sentence flow and bad grammar, begging you to pay attention to the context rather than the content. The Cleansing is one of six short films from Fractures Films, "a collection of short abstract films examining the macabre, the twisted and the obscure textures of life". This particular film takes focus to Michelle and her newborn son who's been possessed with crying, by natural or maybe unnatural means, leaving her sleepless and agitated. Lost in a post postpartum depression of sorts Michelle is at the edge of her sanity and the baby doesn't appear to be stopping anytime soon. The Cleansing covers a wide range of topics from new motherhood to depression but ultimately serves as a horror film. As I'm coming to find with these short films the idea is to capture you as an audience within their short running frame and the most effective way to do that is by shocking you. After the twist is revealed the film runs for a full minute, which converted to full film is rather like twenty minutes, and you're constrained to endure the reality that's been imposed upon you. It's an unpleasant feeling, one that left a pit in my stomach in all honesty.

Kimberly Laurenne is deeply disheveled (as a compliment) in her role as Michelle, she ranges from the annoyed mother, to the despaired, and then changes her tune completely for the ending. An ominous and almost empty slideshow of pictures account for the subconscious of the film and of Michelle's mind. The lighting, the brief abstract shots, and the music was all very reminiscent of the tone in The Ring. The film has a professional appearance to it but it doesn't have an IMDB page or any other signs of big studio release outside Fractures Films website; accreditation for Gary Marino Jr. who did the directing, writing, and served as DP for the film, three notes which I enjoyed very much. If I had to dissect and choose a negative for the film I'd say the baby was clearly not real, but seeing how I don't really care neither should you. In my argument I'd say The Cleansing is a really dark piece, it takes you back in nature but holds you in its cinematography. It's available, as well as their other five films, for a free watch on Fractures Films website. Also while you're there go to their About section for a unique description of what they've set out to do. I quoted a bit from it earlier, feeling it said more about the film than I could say myself. You may also follow them on Twitter for more updates on their films and such.
Posted by Bleeding Dead at 9:09 PM
Email ThisBlogThis!Share to TwitterShare to FacebookShare to Pinterest
Labels: Disturbing, Drama, Horror Shorts