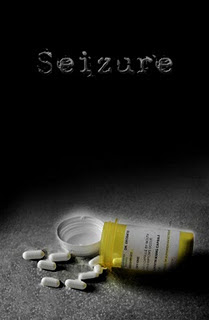 The Horror Shorts have been absent for a little more than a month because of the top five lists but I'm glad to bring it back with Night Walker Cinema's short film Seizure, a contestant for the Universal Halloween Horror Nights short film contest. Isolation has constricted Jordy more than anything, with his only real line to the outside world being his answering machine. His tormenting visions having been written off as mental illness and a pursued fixture by medication, but this may not be medical at all, and Jordy seizures may just be caused by something far more terrifying. This is Night Walker Cinema's first short film and an appealing first piece. The film runs a few seconds short of three minutes and provokes a feeling stylized to what the hell is going on. It comes equipped with a nice little twist ending that may or may not send a chill down your spine, depending on how you feel towards this type of horror.

Brian Ardolino is the man of focus, being the only physical person on screen. His performance is a bit extreme at moments but it makes for a more intense experience and overtly effective. Direction is solid by the two directors, I'm a little taken back as to why this was not accepted in to HHN, though not perfect a lot more adequate than some shit that seeps into film festivals. Cinematography wise it's not exceptional but good for first time DP, particularly the end shot that very cautiously reveals the twist, in the right amount of light. And I really quite liked the font they picked for the credits. A definite watch Seizure is available on youtube for free at Night Walker Cinema's channel. You should also follow them on Twitter for more updates on this film and their upcoming projects.
Posted by Bleeding Dead at 8:01 PM
Email ThisBlogThis!Share to TwitterShare to FacebookShare to Pinterest
Labels: Horror Shorts, Psychological Thriller