Being Thanksgiving I initially set out to review Thankskilling, under the impression that it was the only killer turkey movie to be found, atlas I was wrong. Unbeknownst to this 'gem' a reviewer on Netflix led me to the Something Weird Grindhouse Video. Therefore for this Thanksgiving I will bless you with something a little more obscure...you can thank me later. 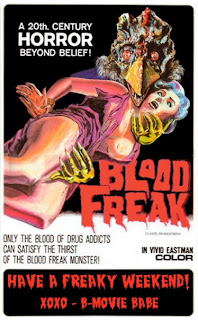 At the opening of Blood Freak our chain smoking narrator introduces us to Herschel, a well liked man from what most can tell. Herschel sees Angel by the side of the road with car troubles and being the kind of man he is (this is specified by our narrator) helps to get her home. At Angel's house her sister Ann is throwing an everyday drug party with her friends. The two sisters are as opposite as ever, Angel the Christian do gooder who has faith in all, and Ann the coke whore. Angel asks Herschel if he's ever partaken in the after school activities of Ann's friends, he replies that he's never done such illegal acts but I'm not convinced. It doesn't take Ann long to pursue after Herschel, nor that long to get him hooked on drugs in a peer pressure incident that even puts 'it'll make you look cool' to shame. While Ann is sexing up Herschel and getting him hooked Angel helps Herschel get a job at her father's turkey farm, which includes an odd assortment of jobs like test eating the turkey. After an experimental turkey eating Herschel wanders off and begins to feel sick, which eventually results into convulsions, and to the score of gobbling turkeys he becomes something not quite human. A human with a turkey head. But for Herschel life is not to simply get better now that he has a turkey head to deal with, he's still addicted to drugs and the only way to curb his thirst is by drinking the blood of addicts. 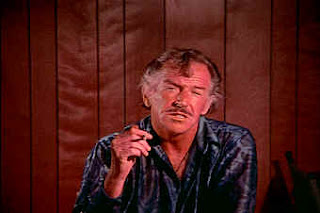 If you under the impression that I'm fucking with you on the plot or exaggerating it for comedic effect, I assure you I am not. It is as I said, so yes Blood Freak is a film about a man with a turkey head killing the drug fiends of this world. I was waiting for Pam Grier to show up at any moment. No doubt produced by Christian society group or the sorts Blood Freak sends the message that faith is stronger than drugs, and forgiveness is inside us all, if we just don't bother to poison ourselves with such evil. The narrator peeks in and out of the film to give us little speeches on the meaning of life, what have you and shamefully cast judgmental looks at us through the film of his cigarette smoke. Herschel manages to make friends and fall in love with Ann after only living there for a week, prompting them to say such things as "you know how Herschel is" or "Herschel wouldn't do that". The special effects are nonexistent in this bloody stump of a film, the Turkey head too clearly a mask and not clear enough to be a distinctive turkey. By the way, brilliant approach to avoiding the leg saw scene, that 'jump' in the film was totes convincing. There isn't a lot of blood until the final twenty minutes where Herschel takes to killing his victims by hanging them upside down and draining them from the throat. But when blood is present its quite vivid and not hidden in the dark lighting or grained film. 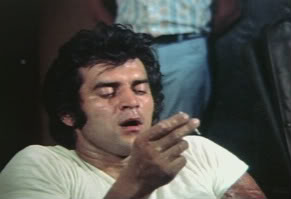 The entire cast is the result of rejected porn stars, or looks thereof. Steve Hawkes is Herschel, the apparently strong, handsome, and attractive to women sort of guy, none of which I picked up on through Hawkes acting. He also wrote and directed the film, it's not adept, I'll say but, if there's anything to speak for acting, writing, directing, sound, etc are all congenial with one another, one is no worse than the other. The Christian narrator played by Brad F. Grinter reads his long diatribes of preach off the queue cards on his desk (a little disheartening considering he co-wrote and co-directed the script with Hawkes), trying his very best to guilt me into salvation. There's an irony here, as the film promotes the life cleansed of illegal substances and tainted meat yet every actor's eyelids hang lower than their pupils and mutter their speech in a monotonic voice. Two symptoms of the clear usage of drugs, and possibly bad chemically altered turkey as poor Herschel was victim too. The cinematography varies between a home movie and the misguided shots of a snuff film. The DP lingers at moments, undoubtedly to delay time as the film only lengths an hour and twenty minutes. The most mundane, and not mundane but equally boring, acts are stretched beyond reasonable capacity; my interest is little in watching a bunch of turkeys gobble in their pens. 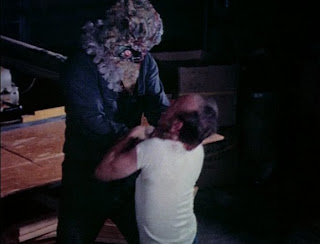 I'm not sure if the film is victim to the same blind innocence as Troll 2 was, not intentionally meant to be bad but consistent all the way through. I have a dissenting feeling that it is, with the uplifting message and all. The film transfer I saw was rough, it looked like they cleaned the strip with sandpaper. It also wasn't as graphic as I had anticipated, there was a sex scene with Turkey Head Herschel but from what I saw it was in black, yet the site I watched it on forced me to make an account to make sure I was eighteen and could watch the damn thing. So if there is an unrated version out there I missed I encourage you to find. This review may confuse you some as I've not said anything positive in the light of Blood Freak but I'm here to recommend. It's not in the so bad its good category as anything as poorly built as this can't even be near the term good, but its so bad its laughable that you may cry sort of film. It doesn't even really belong in any type of genre, it's really a class of its own. Should I just make up an Christian/Anti Drug killer turkey movie label and hope that one day a second film can bask in the bizarre spill of recreation? I think I should. As most seem to be at a loss for words I shall say it; watch it, I suggest not sober. Happy Thanksgiving.
Posted by Bleeding Dead at 7:22 PM
Email ThisBlogThis!Share to TwitterShare to FacebookShare to Pinterest
Labels: B-movie, Bloody, Christian/Anti Drug Killer Turkey Movie, Grindhouse, Monsters

A fantastic and funny review! Your execution in detailing the film is insightful and at the same time humorous. Here's some other interesting facts I researched:

The original financier backed out during production and left directors Brad F. Grinter and Steve Hawkes to complete the movie with their own resources. Also, the cast was made up of acting students from Grinter's class, so this would explain the atrocious acting found in the film. Plus The turkey-monster head that Steve Hawkes wears was made of paper mache. So this was basically a student film, so to speak.