It's Monday...again. And I have a treacherously long research paper to write by Wednesday so forgive me if my writing isn't Shakespearean like (psh-as if it's ever). I have...no followers, still. But that's alright, I'll manage.

Horror movies are basically defined by these next top five. If you hear 'people are so stupid in those movies! They do the dumbest things' the statement has probably originated from the five (or four) films these guys appear in. But despite the hate these films, or more like icons, are infamous and I love every single one of them. My Top Five Horror Icons:

He may be considered the outcast in this since he's about a decade (or two) younger than the rest and he's not a supernatural killer. But admittedly if you see his face on TV or at Halloween store you're instantly going to identify the movie he's in. Ghost Face is simply scary because all it took was a couple of movie obsessed teenagers, 10 dollars for a costume (keep in mind this was the 90s), and Wes Craven and we have a satirical horror movie, that isn't far from being plausible. 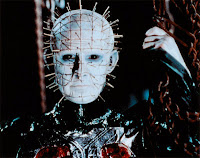 Pinhead is amazing because he's cold, emotionless, and deeply into Sado Masochism. He also happens to the best looking demon out of the centobites. I'm not sure a further explanation is needed to explain as to why he's an eerie presence in any movie he's in. Oddly enough last week's number 4 only needed little explanation as well. Played by Doug Bradley in all the Hellraiser films.

Who doesn't love Freddy Krueger? He has the most personality out of the icons. Dressed nicely in a dirty Christmas sweater, a ragged old hat, lovely 3rd degree burns, and his own pair of razor fingernails. He spends most of his nights taunting teenagers in their sleep, whom he later plans on killing, typically, in graphic bloody ways. The original Nightmare has the best murder scenes (Tina getting dragged across the ceiling, Glen getting sucked into the bed) but he still causes a few sleepless nights for newer fans. He's played by Robert England whose just a really good actor, horror or not. In the remake he was played by Jackie Earle Haley, who, IMO, is basically the only other person in Hollywood who can do this job. 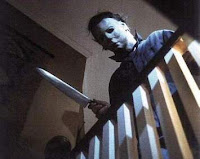 Michael Meyers is arguably the scariest killer in horror movies. I attribute it to his walk and his silence. He doesn't talk and he walks so fucking slow, which normally might make you think he's an idiot but here it's just a twist of killer suspense. One of the most memorable scenes for me is in the second Halloween when Laurie is trying to escape out the basement and he's right at then end of the hall. And all you keep thinking is if he runs to her she's dead, but he doesn't, and it just drives you insane cause there's too much suspense to handle. But I digress, I'm going to quote someone from the 100 Scariest Movie Moments and say; "It was such a blank face that the audience could project anything they wanted on it." -John Landis

I'm a chuckyaholic. I won't get into what possible reasons could conclude why I find a doll with stitches, a foul mouth, and a satanic laugh as cute (to take a stab in the dark I'm just going to have to say it's because I've always been odd) but in truth all dolls are naturally creepy. Don Mancini just amped it up with Chucky, making him the possessed soul of Charles Lee Ray or the Lake-shore Strangler. There's that unsaid rule of children not dying in horror movies and Chucky's basically gone out of his way to prove that wrong. He has yet to accomplish it but who knows. For the past 20 some years he's been played brilliantly by Brad Dourif who is returning to do the voice of him in the remake. Which I'm planning on seeing.

Honorable mentions; Leatherface, derived from real life killer Ed Gein he's a big ass dude who wears the faces of his victims. Despite the fact that I've never been a big Friday the 13th fan I'd be wrong not to include Jason, the hockey mask wearing mama's boy, who just happens to be carrying around a machete.