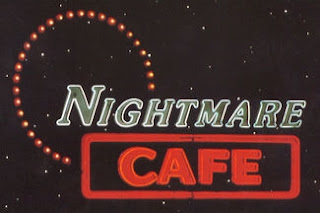 Nightmare Cafe was a curiosity that developed into confusion and finally...an admiration for the show. I found this dated TV show on Chiller early one morning while getting ready. I begun watching half way into the pilot episode and in honesty the show at first looked like a vast mess but like I said it peeked my curiosity and six episodes later here I am.

The Nightmare Cafe is a 1992 TV show developed by horror legend, Wes Craven and Thomas Baum. The show is about two recently dead persons, Fay and Frank, who've been drafted to an all night cafe. The cafe is more than it seems, it's actually a supernatural...being (I suppose) that gives people second chances and its decided to give Fay and Frank a second chance at life, but only if they work in the cafe. As sort of a mentor there is Blackie, the manager to the cafe. People tend to wander in and out of the cafe, all mysteriously drawn to it for a second chance, and it's Fay, Frank, and occasionally Blackie's job to help them out, in what ever capacity that may be. 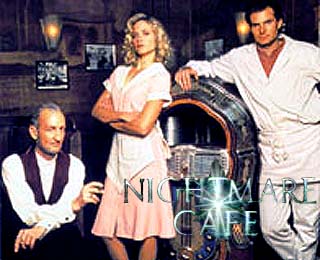 The show was canceled after six short episodes due to low ratings. This sad fact attributed to my initial confusion of the show. At first I wasn't even sure if I liked it, the cafe itself confusing me the most. I wanted to know more on how it worked, who it picked, why it picked them, and just generally why it was special. I'm presuming that if later episodes, possibly seasons, have been aired we'd of gotten to know more about the prominent character of the show.

The acting was also a little...baffling at first. Fay played by Lindsay Frost acting resembled that of a soap opera actress and that got on my nerves. But after the first episode it was toned down a bit and appeared more as Fay initial response to her new found fate. Frank (Jack Coleman) was the same, his acting was odd but that's the entire nature of the show and in fact he and Lindsay Frost were pretty much in tuned with the overall tone. Then there is Robert Englund as Blackie, he was the one who kept drawing back to the episodes, he's just great, as always. He has this perfect comedic timing and a certain sinister quirk to his character. Maybe my favorite thing about the show were the small innuendos that Blackie would throw out, hinting at his age.

The show has been related to a Twilight Zone episode, having that supernatural/horror anthology label to it. Which is a fair comparison, people show up at the "Cafe" and weird shit happens, only difference here is we have three solid characters. There's also a Sci-Fi like element to the show as Fay and Frank basically get beamed in and out of the cafe, and the final episode, "Aliens Ate My Lunch", amps that up a bit. The Nightmare Cafe does have a short episode list and that may turn off some viewers but it grew on me and I'm a bit sad that there isn't a few more episodes, at least enough for a full season, to watch late at night when there isn't much on.
Posted by Bleeding Dead at 10:17 PM
Email ThisBlogThis!Share to TwitterShare to FacebookShare to Pinterest
Labels: Robert England, Sci-Fi, Supernatural, TV Show, Wes Craven