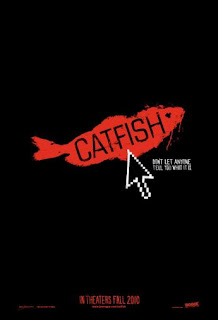 Catfish is an interesting documentary into our society's current status of social networking. The film stars Nev, a young photographer who is contacted by Abby, an 8 year old painter who likes his pictures. Nev and Abby soon start up a friendship that extends through the family and friends of the family, all on Facebook. Then Nev begins talking to Megan, Abby's older and attractive sister who has a crush on Nev. But as the relationship begins to develop further Nev starts to notice some things aren't making sense. So him, his brother, and his friend drive up to Michigan to confront Megan about the inconsistencies.
The previews make this out to be a scary movie and it's not. If anything the ending is just shocking. It doesn't have you gasping at the screen as soon as the big reveal comes, in fact there is no big reveal. Instead it unfolds subtly, showing you how deep it all goes. The big shock is more of the last forty minutes as a whole than it is in one single moment. I came across the term Catfish by accident so the 'big reveal' wasn't as much of a surprise as it may have been if I went into the film oblivious. Which is what I'd recommend as the best way to view it. Still, the critics are right, despite if you know what's coming the last forty minutes inflict a constant change of emotions for it's audience. At times you are sadden by the truth of the film, then intrigued, and ultimately disturbed.
To address the "Hitchcock" statement in the trailer, in my opinion the critics aren't too far off. It's hard to describe without spoiling anything but if you view Hitchcock films you'll notice most have a common element that contributes to the shock factor. Like I said there is no such moment in this as in Psycho when Norman Bates comes out dressed like his mother, but the nature of the films are alike. Between the suspense and the shock factor, Catfish is the subtle version of a Hitchcock film.

While the film itself isn't heavily relying on the use of technology it's just there throughout, making an impact on Nev and his friends along with Abby and her family. It's an important film to see in this century where technology is figure in our daily lives. It might not be for everyone and it may be crushed by its own hype but it was really good and I'd recommend to those who are interested.
Posted by Bleeding Dead at 10:46 PM
Email ThisBlogThis!Share to TwitterShare to FacebookShare to Pinterest
Labels: Documentary, Suspense