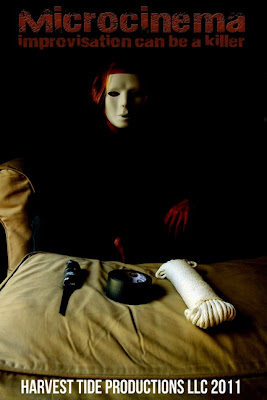 “Harvest Tide and the cast and crew of “Microcinema” are very honored and grateful to be recognized by Geraldine Winters and the Jersey Gore Film Festival,” said Shea. “This might be a spoiler but with this film, I wanted to change the formula of the revenge film after countless movies where we see a woman become a victim before she fights back and either gets away or gets her revenge. It’s a good formula, but I wanted to turn those tables. As a survivor of clergy sexual abuse I wanted to see the predator pay his karmic debt for even thinking about and planning to commit such a crime.”

Shea, whose abuse occurred in the Diocese of Worcester in Massachusetts, is an activist and his films often serve to raise awareness through horror and satire of the ongoing issues around clergy sexual abuse.

Starring Alex Lewis and Aurora Grabill, “Microcinema” (www.watchmicrocinema.com) is the story of Peter Martell, a highly educated, well-to-do young man with too much free time on his hands. He spends it watching snuff films. One day he makes the bold decision to cross the line from observer to participant, aspiring to bring a philosophical element to his own kind of snuff films. Ready to go to work, he tracks his first victim into a haunted New England wood, where the boundary between participant and observer takes a different turn.

“Microcinema” is Harvest Tide’s first online and internationally self-distributed short horror film which scored on several best-of lists and gained momentum as a cult favorite and a hit with horror reviewers. Danielle Holman writing for Truly Disturbing Horror, www.trulydisturbing.com listed “Microcinema” as one of the five best horror films saying, “Skip Shea’s seven-minute short film is deserving in the ranks of the big films as it’s able to accomplish more in less than ten minutes than an hour and a half feature length film.” In her Bleeding Dead, http://bleedingdeadfilmreviews.blogspot.com/ she has called “Microcinema” "…one of the most important horror films of our time."

Chris Conduit of The Conduit Speaks, www.theconduitspeaks.com put “Microcinema” as the best horror short of the year giving it his Conduit Award.

What the critics are saying about “Microcinema”

"The film is brave and unrelenting. It is a breath of fresh air to a lot of the common horror tricks that are being trotted out time and again." -Alexandra West, Scare Tactics Blog.

"Skip Shea is an adept director with equal ability to write, his short film gets more across than most full length films.  4 out of 5 Stars" - The Bleeding Dead Film Reviews.

"You will not be expecting to see the events that unfold in this shocking short film." - The Horror Spot

"The script itself deserves kudos for completely drawing your attention to the one aspect we would expect every horror film to contain and then suddenly shocks you with an element you rarely see in this genre."  The Scariest Movies Online

"I figured I was in for one of three things:  a really solid work, a bite size film that left me feeling nothing, or one of those that makes me want to substitute rat poison for the salt on my dinner table.  Those are the three categories all art falls into for me, always. Yet, when it was all said and done, Shea's vignette carved a whole new icky slot out just for itself. 9 out of 10 Stars" - The Conduit Speaks

"What I find particularly interesting about Microcinema is its plot and how it seems to blend together torture, voyeurism, and a lot of other really weird horrific topics like snuff films." - Horror Society

"The new indie horror romp Microcinema and it is a doozy." - Truly Disturbing Horror

“Twisted and sick but with a new vision.” - The Dr. Chris Radio of Horror