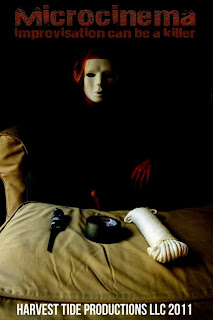 Though it is Friday it is however NOT Irrelevant Post Friday because this is far more than relevant. As an independent horror blogger rarely do I get the opportunity to post a press release, as so far this blog has been limited to dribble and my reviews. That being said Skip Shea, writer/director of one of my favorite horror short films Microcinema, sent me one today, for your viewing pleasure. I've said it before and I'll say it again, Microcinema is an exceptional horror film in the ranks with such like 28 Days Later. If you watch the film you'll understand the reference but don't expect such tame natures, think more like Hostel but with extremity. It's one of the most important horror films of our time, and its only seven minutes. So please don't be lazy and watch it, it's free.

Massachusetts (January 27)  The Horror Palace - The Ultimate Horror Network in conjunction with Harvest Tide Productions will screen the cult hit horror short "Microcinema" on their site January 31.  "Microcinema" will be the focus of Episode 017 in the Grisly Zone.
The positive reviews keep piling up from around the world for "Microcinema" as the South African blogger the Killer Aphrodite says "The bad thing about Microcinema is that it’s not a feature film.  I wished that there was more to see!"
The Big Gay Horror Fan blog says "Microcinema" is tightly directed, well acted and gleefully turns the predominance of misogynistic torture porn on its nipple hacked head."
Directed by Skip Shea and starring Alex Lewis and Aurora Grabill, “Microcinema” is the story of Peter Martell, a highly educated well-to-do young man with too much free time on his hands. He spends it watching snuff films. One day he makes the bold decision to cross the line from observer to participant, aspiring to bring a philosophical element to his own kind of snuff films. Ready to go to work, he tracks his first victim into a haunted New England wood, where the boundary between participant and observer takes a different turn.
“Microcinema” was originally a storyline for one of the episodes of Harvest Tide’s new horror web series “Longreach,” written by William DeCoff. “Longreach” follows the demise of Daniel Jedrek, the sergeant at arms for the Longreach Association, an ancient global charitable organization that takes charity to extremes. The Harvest Tide production team – Shea, DeCoff, Will Smyth and Emily King – agreed that “Microcinema” stood on its own in the burgeoning new online entertainment and media arena and delivers a brutal and gruesome tale to horror film fans.
“Microcinema” quickly became a cult favorite and wowed critics and audiences last year at several horror film festivals and screenings within the few short months of its release. Screenings in 2011 included the 1st Annual Danish Horror Film Festival: THE TURBINE at Spinderihallerne, Vejle, Denmark; All Things Horror Shudder Fest at the Somerville Theater in Somerville, MA; Short Horror Films at AS220 in Providence, RI; the Massachusetts Independent Film Festival; and before Canadian horror film fans at Fright Night Theater presents: ABSENTIA & Microcinema at the Staircase Cafe Theater in Hamilton, Ontario.
It has also made several best of 2011 lists including Danielle Holman, The Bleeding Dead, writing for Truly Disturbing Horror, www.trulydisturbing.com listed "Microcinema" as one of the five best horror films. Chris Conduit of The Conduit Speaks, www.theconduitspeaks.com put "Microcinema" as the best horror short of the year giving it his Conduit Award.
*******************
What the critics are saying about “Microcinema”
"The film is brave and unrelenting. It is a breath of fresh air to a lot of the common horror tricks that are being trotted out time and again." -Alexandra West, Scare Tactics Blog.
"Skip Shea is an adept director with equal ability to write, his short film gets more across than most full length films.  4 out of 5 Stars" - The Bleeding Dead Film Reviews.
"You will not be expecting to see the events that unfold in this shocking short film." - The Horror Spot
"The script itself deserves kudos for completely drawing your attention to the one aspect we would expect every horror film to contain and then suddenly shocks you with an element you rarely see in this genre."  The Scariest Movies Online
"I figured I was in for one of three things:  a really solid work, a bite size film that left me feeling nothing, or one of those that makes me want to substitute rat poison for the salt on my dinner table.  Those are the three categories all art falls into for me, always.  Yet, when it was all said and done, Shea's vignette carved a whole new icky slot out just for itself. 9 out of 10 Stars" - The Conduit Speaks
"Brilliant. 8.5 out of 10 Stars" - The Gruesome Hurtzogg Horror Movie Review Podcast.
"4 out of 5 Stars" Char Hardin
"What I find particularly interesting about Microcinema is its plot and how it seems to blend together torture, voyeurism, and a lot of other really weird horrific topics like snuff films." - Horror Society
"Microcinema Doesn't Disappoint" - Victor Infante, The Worcester Telergram & Gazette
"The new indie horror romp Microcinema and it is a doozy." - Truly Disturbing Horror
"Interesting short that starts as your usual slasher/serial killer fare before taking a wicked little turn." Shaun Sjolin Cenobiteme Blog
"Unicornsblud Horror Review Stamp of Majestic Approval"  Unicronsblud's Horror Reviews
“Twisted and sick but with a new vision.” - The Dr. Chris Radio of Horror