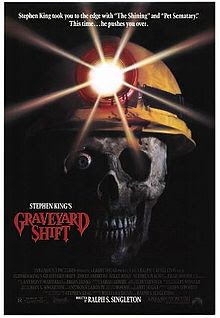 Drifter John Hall has just gotten a job at a textile mill working the lonely graveyard shift. The mill job is basically no different than others except for the fact that carnivorous rats infectiously live there and aren't shy towards the humans while they work. A much bigger rat though assumes position of Hall's new boss, who is reputed and religiously practices being a prick which includes but not limited to hitting woman, blackmailing workers and in general treating his employees like shit. When Hall steps in during a fight and prevents Warwick from beating his mistress Hall makes the list of the cleanup crew in the basement, a job given only to those Warwick really dislikes. At surface value the side job doesn't appear so bad, another graveyard shift on a holiday weekend that pays twice that of minimum all just to do clean up. But when Hall and the rest of the crew head to the basement they find the horrors of what's been growing in the darkness and a answer to all the recently missing workers at the mill.

I'm a bit addled as to how it's possible to send a Stephen King short story into disarray. A full length novel yes, but a short story that's essential plot moment is the cleanup crew in a basement? In truth I'm not even sure what occurred for a good half of this film, as nothing was developed. Instead a shallow plot carries equally shallow characters into a well lit (I'll address that later) basement where a monstrous creature is eating the workers. Having read the short story part of the terror was the concept that the untouched areas of darkness could mutate horrors beyond conception, hence the legless rat at the end of King's story that brought more terror in its inability to move than this flying bat creature of proportions. The script was almost painful at times by how obvious it was that King didn't write it, the dialect being flaky and the skin deep story. The missing workers addition seemed so slasher in context that when contrasted against the monster sub genre it falls in the it didn't really work bracket. The small love story added to appeal to more audiences was needless and it went nowhere. I'm not sure I'll understand the obsession of making two characters of the opposite sex always being attracted to each other in films. Maybe why I seek out horror and not romance. 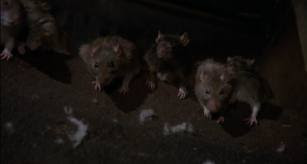 David Andrews is alright as leading man John Hall, as said there's little character development and all Andrews has to do is essentially stand there and be the good guy. I actually don't mind that Hall's character direction went basically no where in the film, as in the story it seemed more of a Jack Torrance play off and was dispensable in what should of been the basic monster under the stairs story. Stephen Macht's Warwick was creepy but I'm not entirely sure if that was by default or from that accent he was attempting to do. I spent a good hour and a half waiting for a rat to gnaw his face off and for that horrid voice to be dead forever. All sarcasm and humor aside that accent was the scariest element about the film. If anyone was notable, and not for strange New England African Southern Drawls, Brad Dourif was hilarious as the offbeat exterminator and shows the only true bit of acting from the cast. From a cinematography point Graveyard Shift does have some nice shots of photography, particularly the opening credits in the graveyard but I had a huge issue with the lighting at the end. This may be a nit picking horror film critique (have I really come to that?) but why was the basement so brightly lit? King spent endless paragraphs and sentences describing the immense darkness that lye underneath the factory but everything was in clear view here. It took another fraction of horror from the story that was already limited in most respects. 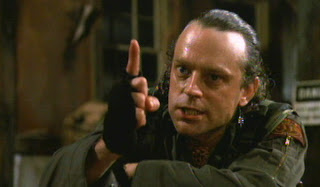 At the end Graveyard Shift is just an inept film, with direction and writing being it's main faults. Hardly anything redoubtable, unless you have a fear of rats. This is not my favorite King story, by no means, and further adaptations have been much worse for him but turning the short story that didn't have much too it into a full length film seems inane. And again if your just going to change everything than why bother. Also I must point out the tagline inaccuracy which reads "Stephen King took you to the edge with The Shining and Pet Sematary. This time......he pushes you over", almost sad how untrue the statement is. If this is to attest for anything it's to not believe taglines. Graveyard Shift is not an entirely wasted watch, it does hold some interest in the rats and I love Brad Dourif with all my horror movie loving heart so it's always good to watch him be creepy. Likely a two out of five star film there's no need to watch the forgotten early 90's film unless you've had your eye on it.
Posted by Bleeding Dead at 8:17 PM
Email ThisBlogThis!Share to TwitterShare to FacebookShare to Pinterest
Labels: Brad Dourif, Monsters, Stephen King