I'm starting a new feature to this blog. No it's not another post a week (that be the day) but a feature. At the last Thursday of every month I will be reviewing an Italian horror films. I realize my love of Argento is absurd but I haven't taken all the much notice to the other legends such as Bava and Fulci, I still haven't seen Zombi 2...please don't kill me. I'm going to be expanding my love of the Italian horror films at the very least once a month and my first is of Mario Bava's Black Sunday. 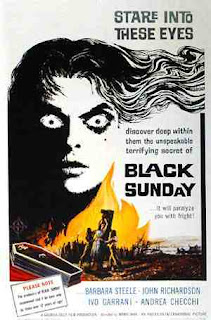 In sixteen hundreds Russia a witch, Princess Asa Vajda, and her servant are being executed for practicing the sacrilegious craft. Asa death is one of the most famous horror film moments as she is tied to a stake and a mask with nails lining the inside is hammered to her bare face. In an grisly moment, even for a black and white film, Asa dies but not before vowing revenge on her executor, who also happens to be her brother. Buried in a tomb with a cross sealing her coffin the Vajda family believes that they've seen the last of their shunned relative. Until two hundred years later that is when two doctors stumble into the tomb and break the coffin that encrypts Asa. Now awaken and intent on her revenge Asa seeks to posses the body of her descendent Katia, who eerily shares the same features as her. As Asa begins to gain strength the only person to save Katia is Dr. Andre Gorobec, one of the doctors who broke the cross and Katia's new lover interest.

A hint of Poe hidden beneath the surface Black Sunday takes to the macabre, surreal Gothic imagery and religious symbolism (the reoccurring presence of the serpent, the Griffith, etc). A witch with vampirism manners is a bit of controversy in the film as Princess Asa bites and drinks the blood of her victims only to offer them a trance in death where they're under her control. It sounds more in likes to the vampire myths than it does the spell casting witch myth, but in my opinion the film calls her a witch without so much of a hesitation on the other word in that it is a witch film, despite the similarities. The dialog is no more odd than an Argento script and the dubbing no better so be cautious of that. The effects probably outstanding at the time still work for now, the witch's transformation is subtle enough that I only noticed when it took full form. Bava as a director is stunning, and brave for the time. As said the first scene is the most horrific in the entire set but so effective in that Bava shows no fear in disporting the graphic execution, blood and all. Having been released the same year as Hitchcock's Psycho which also had a profound impact at exposing gore on camera.

The acting has it's inevitable cornball moments. The priest actually stood out to me as the actor who played him in a calm and confident manner, despite not really having a contributing part in the film. Barbra Steel's career resulted as of this and its understandable. Though she tends to the chew the scenery as of Katia she has the creep factor for the witch. Her gorgeously large eyes when properly wielded can create a daunting stare. Even the professor notes how even eyeless they seem to bare into the soul. Not to entirely throw away the damsel of Katia she has her mysterious moments as well to probe whether she's in on the murders. John Richardson plays Andre and he's alright, there's not much to his character so there's not much to play. Though enriched in black and white film I was genuinely grossed out at moments. The human bodily fluids and the revealing of the witch still have a sovereignty over the films technical work and appeal to its lasting age. 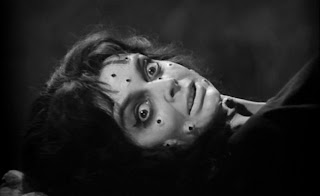 I'm not sure what captivates me about Black Sunday as I'm even tolerant towards the melodramatic love between Andre and Katia. Its almost feels like an inexplicable phenomenon when I love a film at first viewing. Rarely does it occur as films have to sit and marinate, if you will, before I account them as exceptional. Black Sunday is the most recent of phenomenons. Back to being objective though, while this Bava's first piece and the one that crowned him as an Italian horror bravado not all consider it his best. And as mentioned if you hate bad dubbing why consider the country's genre films. I hate dubbing so I wish I was able to watch it in Italian with subtitles, but I'm able to take it as it is. The same goes for acting, its not great in all places but I'm more forgiving as I hold certain things over others. Black Sunday is a classic watch for Italian horror fans and a great introduction to those just starting in the sub-genre.
Posted by Bleeding Dead at 10:31 PM
Email ThisBlogThis!Share to TwitterShare to FacebookShare to Pinterest
Labels: Black and White, Classic, Italian Horror, Mario Bava, Witches