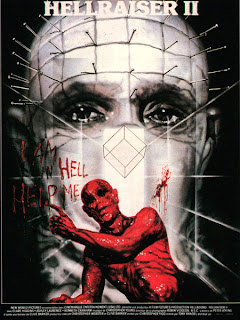 I don't think I've ever been so confused after watching a film. Here's how it went...or at least I think. Immediately after the events in the first film Kirstie is taken to a mental hospital where's she being held for her questionable testimony to the police regarding what happened with her father. At the hospital a particular doctor takes notice to Kristie's story and pursues finding the puzzle box and mattress in which Julia died on. Turns out the doctor is obsessed with the box and ends up bringing Julia back to life. The same story as the first pursues and once in full form Julia then takes the doctor into hell by having a smart but quiet girl at the hospital open the box. The three of them wander inside hell, plus Kristie who also managed to get into hell some way or another, but I can't recall. Inside hell Kristie discovers what its like, seeing her Uncle Frank's personal hell, and the doctor becomes a cenobite. Hellbound: Hellraiser II leaves a lot to be desired.

The scariest thing about the first Hellraiser film holds true in this one, and that is the violent imagery. Julia downing a mummy attire is an eerie image. The biggest killer of the film is the plot, where my sister and I felt blatantly confused afterward. In absolute the plot made no sense, nor did it connect, nor did it even seem to follow through. In a lot of ways it reminds me of seasons three and four of True Blood, several different plot lines, all trying to play out at the same time, some end mid way, some drag out till the end, some don't even start till the middle of the film, all not really be treated properly. The sadist doctor, where I can see would be a fitting job for the films S&M background doesn't really appeal to the audience as at first you could really give a shit whether or not he survives in hell, and more so when he becomes the torture doctor he 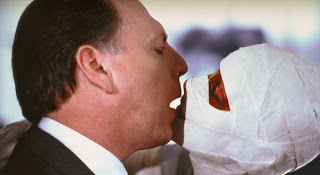 looks absolutely ridiculous. No where near as horrifying as Pinhead's getup. Some of the other stuff is interesting though, the look through hell was interesting, I enjoyed to see how the Cenobites were only a section for those who opened the box and the rest was just a look into how it's a personal experience for anyone who dies.

The acting defiantly improved, Ashely Laurence was actually really good in it this time, understanding her character better. Clare Higgens is about as good as she was in the first one, so I'll let you be the judge of that. But I enjoyed that they brought her character back, almost as the ultimate bad guy from the first film. Pinhead talks a lot more in this one, and I must say he has some stuff to say. I wouldn't call his dialogue witty by any means, nothing like Freddy Krueger's speech, but a lot of his sentences are almost quotable, and fitting for hell. I also kind of enjoyed how Kristie and Pinhead, as well as the rest of the cenobites, are almost friends at this point. He willing lets her wander around hell and she helps him remember who he was. 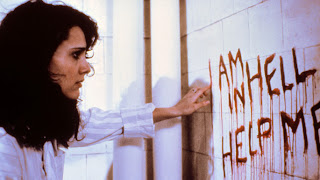 I don't really know how to recommend this, while there are several disturbing images, and I'm sure some that will make most squirm, the plot is honestly a mess. If such you can call it a plot it almost leaves a bad taste in your mouth. It's also one of those films that starts out good but manages to collapse in on itself. However; I don't necessarily think it was that awful of a film, maybe my recommendation can stem from not necessarily going out of you way to watch it but if it's the only thing on or your a huge Pinhead fan, then yes its not too bad.
Posted by Bleeding Dead at 6:51 PM
Email ThisBlogThis!Share to TwitterShare to FacebookShare to Pinterest
Labels: Bloody, Cult Horror, Satanic