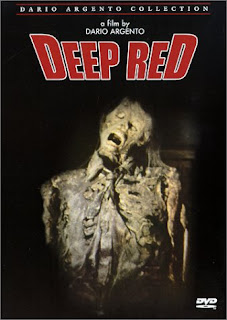 After a performance jazz pianist Marc Daly is witness to the brutal murder of psychic Helga Ulmann, who read the mind of the precocious killer earlier in the day. Marc with little leads from the police begins his own investigation with the help of a feisty local journalist. Dissecting the clues though proves as a challenge as the killer is always a step ahead of Marc, and is now targeting him. Drawn into different leads, only to be left dead by the killers actions Marc begins to uncover that this killer isn't all that new to murder and has a very dark past. I must apologize ahead of time, though I'm not comparing it to Suspiria, the film comes up several times in this review, but do know that I do not measure this based on my love of Dario Argento's masterpiece, merely just using it as reference.

Deep Red, or Profondo Rosso,  is the first of Argento's stuff that has scared me since seeing Suspiria years ago. I admittedly jumped when that doll came running out of the closet in that absurd bit of laughter, it about scared the piss out of me. In true Italian Horror, or rather maybe just signature Argento, the deaths are gory and run a bright red color of blood. Always memorable my personal favorite was the bathroom scene murder, where it was actually absent of blood but made for a rather haunting death that doesn't leave you. The murder mystery proves to be as deceiving as can be, I only guessed it seconds before the reveal. As in all his films Deep Red is quite visually stunning to look at, with the dazing use of red and surrealistic lights of blues. In this however Argento uses a distinct lack of color, painting a portrait with neutral tones, which I may find more gorgeous to look at than the former. The music, though phonemically composed by the Goblins, is ill-fitting at times (i.e. Giordani's death, Marc scaling the balcony), but very tone setting in others (Amanda Righettani death, the uncovering of the drawing). 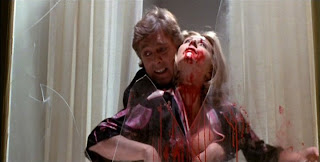 I'm an Argento finantic as much as the next horror movie lover but I'm not shy toward admitting there's faults in his work. In watching a Dario Argento's film I've noticed that generally the same story occurs, or rather the same basics. The beginning usually opens up with a woman who we never really get to know dying a gruesome death only to be followed by more unattached deaths, all of course in full giallo style. Also in having a love for his films that does mean you substitute certain qualities over the others, i.e. I'm willing to forgive the poor sound editing in respect to the DP and camera movements. The construction of characters is more developed in this as opposed to his prior films, and oddly human with their faults and personalities. David Hemmings Marc, the pianist, is sensitive in his work as an artist, which is humorous in contrast to Daria Nicolodi's Gianna as the high strong reporter. And then the darker side of the film, Gabriele Lavia as Carlo, the talented composer suffering from alcoholism.

In reading reviews prior to viewing the film most acclaimed this as the best of his giallo's, which as far as I've seen might be true. Hoping that my next film to watch by him does not disappointment me as the dreaded Tenebre, which unfortunately might be attributed to me watching it after I watched Suspiria. When renting the film make sure you get the Italian version, not the American. For those who hate subtitles you'll be disappointed as putting it in English there still are bits in Italian for scenes that had to be re-edited in after being cut. But that's the film in full form and has several important if at the very least enjoyable moments. Nothing will ever be Suspiria, I'm sure most know this, but Deep Red is rather a good on its own terms and defiant of the genre giallo. I really enjoyed the film and found it scary, I'd recommend for Argento or Italian horror fans.
Posted by Bleeding Dead at 7:15 PM
Email ThisBlogThis!Share to TwitterShare to FacebookShare to Pinterest
Labels: Bloody, Dario Argento, Giallo, Masters of Horror, Suspense, Thrillers, Visually Satisfying