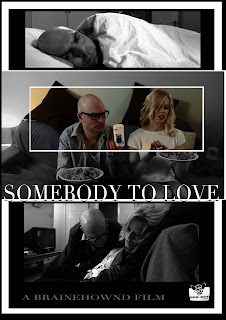 Love has found Sebastian, it just wasn't the love he was expecting. A doleful, albeit unsettling, tale about a necrophiliacs failed marriage to his dead bride is both interesting and unnerving in its unusual portrait of the broken heart. Somebody to Love takes a horror body but has a romantic soul with its introspective on a human's instinct to love but how often that proves more difficult than none, as our expectations rarely align with reality. The eleven minute short is of the quieter side of horror and doesn't use any common staples of the genre. It plays out more as a drama as it shows us a life between Sebastian and his bride similar to any other marriage. The exception is Sebastian's growing unhappiness in his new life and that none of it is real. The presence of fear lies in Sebastian's actions that appear loving and normal at the exterior but are all lined with the concept that his retrieved bride is dead for the entire length of their marriage, and therefore every thing is in actuality really creepy. The happy life is the shadow that masks the true nature of Sebastian and his world.

The script is solid with a dialogue that sounds appropriate to the content and subject of the short. And directing in likes to that is strong overall. Alex Hughes as Sebastian is played well as his character is often loving and disturbed at the same time, Hughes seamlessly blends the two characteristics with ease. Though Hughes may be the lead the show is stolen by Natasha Staples who plays the wifey part all too well. She's both lovely and forceful in her right as his newlywed bride and commands most of the screen with her performance. Together both have chemistry and despite that they look like a Twilight Zone couple they respond off each other well and it ultimately comes off as convincing. The cinematography and music are both favorable assests to the film as they capture the tone perfectly. Between the angelic lighting on un-dead Cassandra to the weird techno score that plays as the two are with each other intimately for the first time it keeps up with every pace of the script. I have a partiality to genre films that tell real issue stories through horror and that's what Somebody to Love is. There's a feeling of dejection as most of us are all too familiar with the misguided love; the film comes to terms and coopes with this by telling a love story about a man who finds unhappiness even in his most dark and twisted fantasies. I fully recommend Somebody to Love as it's a fantastic short with a warped heart.

Somebody to Love is making its way around film festivals but if you'd like to watch it you can contact BraineHownd Films on their facebook, twitter, or at their site.
Posted by Bleeding Dead at 7:07 PM
Email ThisBlogThis!Share to TwitterShare to FacebookShare to Pinterest
Labels: Drama, Horror Shorts, Love Story From Hell