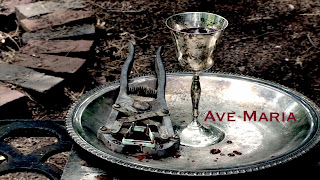 A clergy man abides his sentence from three women in the woods, as a recording of Ave Maria drowns his screams. Skip Shea's Ave Maria is an eloquent twine of gore, music, and enacted karma. It's a pair to Shea's acclaimed Microcinema and in that the two are both lovely masterpieces that speak of violence in our society. There's no dialogue, the six minute run time a symphony of music and constructed torture. Shea as a director understands the appropriation of blood in a film and doesn't opt to show more than necessary. Though he is guilty we are never witnesses to the clergy man's crimes as Shea trusts the audience to display the revenge first and unveil the fulsome truth later.

Aurora Gabrill returns as Missy, the white masked crusader of justice, whom is our anti-heroine, if you so will. Gabrill again plays a brave part in an unconventional female character in cinema, horror and non alike. Cinematography speaks for itself as it's balefully set in midst of the woods, the beautiful view of nature to timid the cringing horror. It will make a few squeal in its single act of violence but is a simple, beautiful piece to add to a collection of interesting works. In tradition of his works Ave Maria will not be for everyone as the religious text and the film's bizarre approach will off-put some, but for a horror aficionado it rings unique and gorgeous, leaving enough for the viewers imagination but volunteering enough visually to leave you averse and fascinated. Ave Maria is a lovely edition from the director that I suggest is best watched as a double feature to its more masculine counter Microcinema. However the feminine side of this story stands on its own and must be seen regardless if you liked the prior.

Ave Maria will be making its way around film festivals so watch for it. You can follow the director and its star on twitter for updates.
Posted by Bleeding Dead at 10:15 AM
Email ThisBlogThis!Share to TwitterShare to FacebookShare to Pinterest
Labels: Bloody, Disturbing, Drama, Horror Shorts, Religous, Torture