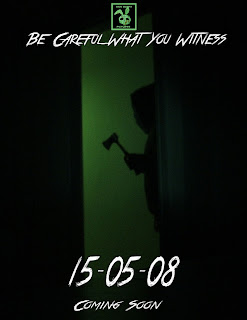 A police recovered video tape reveals the final moments of four young people who's curious spying on the neighbors house brings a chilling terror into their home. The short film is a compilation of modern horror concepts, most familiarly the home video camera and always unsettling plastic masked killer, that will best appeal to those who enjoy home invasion thrillers. The sixteen minute run is pallid with blood but replete with suspense, the latter holding the chill of the film. The likely killer that will turn off most is the idea isn't all that original with minor characters that you never really get to meet. With saying that though the execution is done well and while its an additive to the ever growing found footage film collections its a really good one at that.

With exceptions the found footage genre is best done when no money is provided to you, in that the scares feel more authentic. 15.05.08 has this asset best to its viewing as the natural chemistry of the cast (likely all friends and family) with the shaky cam makes it feel like a real youtube video, and I don't mean that offensively. Though its noted that despite an overall average sub-genre use of the camera there are a few unique and creative shots that I quite liked seeing. There's no exception here in questionable character motives but its a facet of horror that I just accept. The script may not be all that original but it's really the production and the direction here that make the film a pleasant viewing. 15.05.08 is a chilling little short film that will appease those who love the genre type and is an overall good late night watch.

You can watch 15.05.08 for free on youtube. If you have a short film your interested in having reviewed you may send it to me at bleedingdead22@yahoo.com.
Posted by Bleeding Dead at 8:21 PM
Email ThisBlogThis!Share to TwitterShare to FacebookShare to Pinterest
Labels: Found Footage, Home Invasion, Horror Shorts