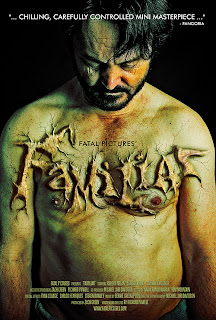 Sanity fights an inner monologue as husband and father John Dodd increasingly begins to lose his mind, taking his inability to tolerate the mundane of his life to a drastic end. The name Cronenberg is being thrown around with this short and short duo (director Powell and producer Zach Green), for good reason too as they create a film with a very much body modification horror but without the schlock that came with Cronenberg's early films. Which I'll address first more than anything is the exceptional special effects by The Butcher Shop, good not only for a low budget short film but good for any film with an illimitable amount of money. Richard Powell's script is the essence of fear as his character John Dodd engages in horrifying acts, the first which occupies the build of the story and the latter which proves for a flinching climax.

Where is Robert Nolan in mainstream horror? Nolan delivers an aberrant performance in John Dodd, a man lost in his own head and life. Powell's direction is on par with his script writing. He and Nolan are made for each other on screen as he directs one of the most bleak horror shorts I've seen. Again my favorite use of a real life horror act paired with an inhuman one creates a more faceted horror film. Photography for the film is subtle and makes for a fitting background to Dodd's disturbance. The contrasting darkness in the bright suburban home sets a dense mood and easily reflects the character's emotions. Green and Powell's twenty minute short film is not only a testament to independent budget film making but an effectual addition to the genre itself. It stands without sympathy or generosity from the limitations and is by itself a rather chilling horror film. The ending may not be for the squeamish but if you can stomach it this a definite short film watch.

As usual Familiar is making its way around film festivals so look for it. You can keep updated with Familiar on its Facebook page and follow Fatal Pictures on Blogspot for more info on this short and others.
Posted by Bleeding Dead at 10:16 PM
Email ThisBlogThis!Share to TwitterShare to FacebookShare to Pinterest
Labels: Bloody, Disturbing, Horror Shorts