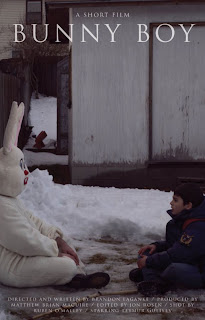 My viewing for the film Bunny Boy came to me from no other than the lovely Mile High Horror Film Festival, where the majority of the Horror Shorts I'll be doing are also birthed of. The film's poster caught my eye and it was what led me to pick the Shorts slot over a film like Chilerama or I Saw The Devil. The five minute running time tells the story of a boy, who sees a man in a bunny suit, sitting by the side of the road, seemingly dead. A silent conversation pursues when the boy tries to feed and give the bunny water, what the boy doesn't realize though that there is a reason this particular individual is sitting by the side of the road, in a bunny suit, not really being all the way there. Maybe the moral of this short is don't talk to strangers?

Bunny Boy was likely the only horror short I absolutely loathed at the MHHFF, so much in fact I feel wrong just writing about it. I'm a horror fan so violence doesn't phase me but I prefer when it has a purpose, whether it'd be comedic or to send a message, I don't care, as long as its not gratuitous. Bunny Boy misses this mark severely at showing violence just to be weird, and to attempt to disturb you. I found it disturbing, but not on an artistic point, rather at the idea itself. I feel sorry for the other films that missed the available spot from whoever voted to keep this in. Maybe I missed the point. I'm not ashamed in admiting I don't always understand a films intention but really as far as my viewpoint it lacked purpose and thought, a pathless walk trying to classify itself as horror. I'm too pissed off about it to even note any light points like the cinematography. I hated it, don't waste five minutes of your life watching this. Please...

BUT if you must Bunny Boy is making its way around film festivals (horror and non horror alike), so look out for it.

*Update: I've decisively found a place for the Horror Shorts now, it'll be the second Sunday of every month. I would like to do it at least twice a month but as of now I'm limited because I've only seen so many. Again if you have one you'd like me to watch and review send me a link on my twitter or at bleedingdead22@yahoo.com.
Posted by Bleeding Dead at 5:45 PM
Email ThisBlogThis!Share to TwitterShare to FacebookShare to Pinterest
Labels: Disturbing, Horror Shorts