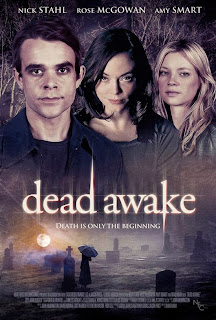 It's not fair, how am I suppose to summarize a film if there is no coherent plot to describe? I've had to do this twice now and I'm becoming a little irksome of it. Oh well, I'll try my best. Dylan is a funeral home assistant, or Morticians assistant, or whatever, plagued by the memories of his past. When one of Dylan's old high school football teammates dies and it brings a reunion of his class to his funeral home Dylan gets reunited with his ex love Natalie. Seeing his friends death and Natalie Dylan gets a bit bummed on himself and bets his boss that if he faked his own death no one would come. Taking the bet Dylan waits the day in the coffin for what appears to be a no show, that is until an unhinged junkie crashes the wake.

I almost forgot to post this review which may have been a sign. It's full of intolerance towards the director and the screenwriter, with a sparingly few nice things said towards the actors. Proceed with caution. The concept, a man faking his own death, is provocative in theory but poor in execution. Dylan fakes his death for one scene and the rest is of him trying to get back with Natalie and following the junkie around to inconclusive events. The film consistently tries to discuss a larger meaning of death and redemption but the writing is so up and down it doesn't work out. They show flashbacks to recap what's occurring in the film (aka, nothing) but often replay scenes we saw five minutes ago, rendering the technique pointless. The car crash doesn't intrigue you so when the big mystery is revealed you could care less. I'm usually able to excuse a plot less film if the characters hold strong, but they don't in this. Dylan, though having a tragic past, doesn't care about himself and neither do you. In general for a thriller it lacks thrills. 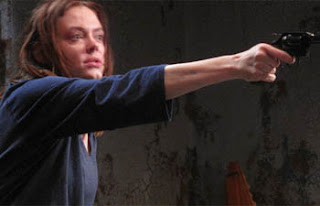 Rose McGowan is the only intriguing character, and she's well played, as McGowan rarely disappoints. Nick Stahl, who suspiciously looks like Michael C. Hall in this, is good. There's one rather dramatic moment between him and Decko and if it wasn't for Decko's acting it may have pulled through. Amy Smart is good too although I've seen her in better. The two Irish sub parents to Dylan, Decko and Liz, are awful. It's apparent that their accents are fake (or at least sounds thereof) and that the screenwriter gets a kick out of Decko saying Shit in the accent, so it sounds like sheit. The director and cinematographer try to hard to make the tone of the film dark and edgy, that has a lack of consistency as well. There were deep shots of grungy indie lighting and then scenes shot in clear day, neither which flow with the visual palate of the film. 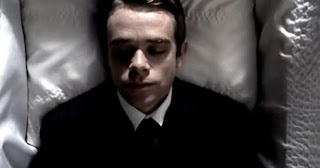 I was done with it at an hour in and the last half didn't seem to end. There was no plot and hence no climax. The film does make sense though when the last minute twist is revealed and you understand what the purpose of it all was. That doesn't change how it tried to basically bore and drive you into insanity for the first hour, and not in a good way. Still the plot holes are immense and there are still unexplained elements (the detective anyone?). The film steals, not pay homage but actually steals, the tagline "Death is only the beginning" from The Mummy remake, and the poster is a clear rip off of the Twilight Saga posters. From reviews on Netflix and on IMDB some people acclaimed this as an indie Sixth Sense and found the story different but good. Personally I found it to be poorly written, poorly directed, and I hated it. It more or less just bored me, as it is managing to still do now. Not deserving of a recommendation from me, sorry.
Posted by Bleeding Dead at 9:38 PM
Email ThisBlogThis!Share to TwitterShare to FacebookShare to Pinterest
Labels: Drama, Supernatural, Suspense, Thrillers