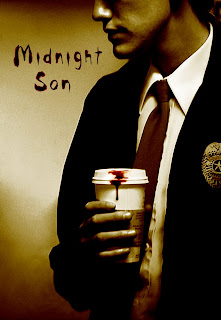 In Midnight Son Jacob has suffered from a sensitive skin condition all his life where any exposure to the sun will severely burn him. As an adult he begins to notice that more symptoms seem to be appearing, specifically a thirst for blood. Tight for supplies Jacob has to resort to different, and creative, matters to curb his hunger which gets him involved with a blood dealer who provokes trouble in the security guard’s life. All this happens to align with his meeting of Mary, an attractive bar tender/candy cigarette dispenser who doesn’t appear to mind Jacob’s nocturnal lifestyle. As Jacob begins to divulge further into his vampirism his liking of Mary grows and the two begin to connect on an intimate level.
Midnight Son was the only full length film I saw at the Mile High Horror Film Festival and I'm glad I did. It was beautifully shot, beautifully written, and beautifully acted. Basically it was a sublime film that I want to own. It's what most modern vampire love films are not, romantic and horrifying; capturing the trauma of relationships and the inner desires, vampire and human alike. As much as I did love the film its not full horror, as the only truly terrifying part is the last five minutes and the aesthetic last frame. Up until then it’s mainly Jacob adapting to his life and falling for Mary. That’s not to attest that it’s not a horror film, it is but like another in its genre, Let The Right One In, its just not in your face. The subtle and kempt paced finale is a moving and violent build up, and the final image haunts you long after it fades to black. 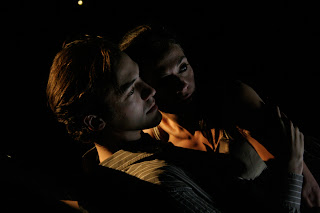 Writer and director Scott Leberecht created a unique script where Jacob's conditions weren't just amounted to vampirism but diagnosed as actual illnesses (anemic photosensitive anyone?). The love story is not only convincing but quietly played between our two leads Zak Kilberg and Maya Parish. There's that struggle but desire to come back. Kilberg's Jacob is able to let way with his carnal changes in breathtaking pain but doesn't overplay the hatred of what he is. Parish plays a darker Mary with her drug habit, but it’s countered with her tending towards Jacob's unusual lifestyle. Both actors are deeply in-stitched in their roles, and with each other; there was never a moment where I didn't believe that Jacob liked Mary. The lighting and cinematography give way to a more gritty style; with a conducted base of grim tones and camera angles, several scenes stay in your mind from the art alone. 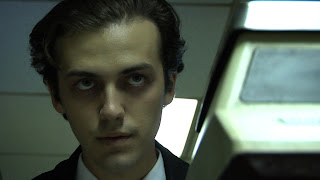 This review isn't particularly long as there isn't much to say about Midnight Son other than that...it's a beautiful film. If ever in need for a definition of the adjective and noun when used together this would be the film to render such. There were a few questions I had that went unanswered but another thing Leberecht did was set up the script so I was able to imagine what happened after the credits (my questions pertain to more of Jacob’s past). I’d also like to note that the image of Jacob holding a blood stained Starbucks coffee cup is really just waiting to become iconic. Midnight Son isn't available for direct watchers as of the current, mostly gaining its viewings at film festivals. Therefore access to this uniquely incredible film is limited. However, if there is a film festival within your range playing this GO SEE IT. Please do not miss it; you won’t regret what I find to be a gorgeously laid out film and what’s currently developing into a favorite of mine.


Go to the film's website,  http://www.midnightsonmovie.com/, to get more info and try to get it in your area.
Posted by Bleeding Dead at 5:33 PM
Email ThisBlogThis!Share to TwitterShare to FacebookShare to Pinterest
Labels: Gritty, Love Story From Hell, Vampires, Visually Satisfying

This sounds like a must-see, although I hate that the best movies (indie and foreign especially) are only available to me much later as DVD rentals. I'm so envious that you were able to catch this on the big screen, for as large as my big screen TV is (it dominates the living room), it's not the same as a movie theater screen with it's larger than life images.

I'm usually like you, limited to my TV and computer screen so this was a really rare watch for me. I'm hoping it gets released on DVD soon or at the very least come into theaters so more people can see it.