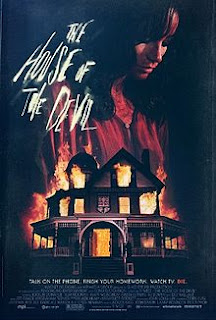 College student Sam is looking for a way out of her college dorm and her less than hospitable roommate. With her new house set to move into Sam's only problem is coming up with advanced rent by the end of the week. When she sees an ad for a babysitting job it appears as the perfect solution. But upon arriving at the house Sam finds that the babysitting job isn't really for a baby and the house isn't all that normal. Taking it despite reservations Sam soon realizes that the lunar eclipse aligning with the night is not all that of a coincidence.

The film is set and decorated as an 80's movie, with a splash of Grindhouse. Writer and director Ti West filmed the movie on 16 mm film to give it a grainy appearance reminiscent of the days before HD. The sets are rather homey and realistic and it freely lets you slip into the film as the Ulman's house is resemblant to your neighbor's home. Costume, music, dialogue, all 80's with a hint of modern to keep it current. That's why I say it's an 80's film because if it wasn't for the date it'd easily could be. It doesn't move fast, it takes it's pace cautiously and slow building up the suspense all for a very blood soaked climax. In a way this film could be the cure for the horror dilemma for those who prefer story build up over gore and vice verse, as the latter is almost absent the entire film, but makes an explosive appearance in the last half hour. The horror is present in the glimpses of the Ulman's secret as Sam wanders throughout the house, and in the only death in the first part of the film which will catch you off guard, at the very least. 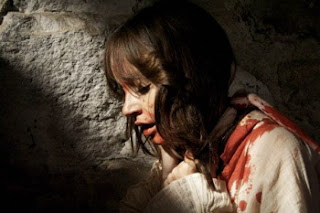 Jocelin Donahue plays the slightly naive Sam in a very true to form portrayal. She's likable, sweet, and relatable, she's also rather smart, something Ti West did do away with the 80's horror facade; the less than competent final girl. Whenever I see Greta Gerwig I always think she's strung out, as I did in this, however I actually liked her this time around. Her character is the typical extroverted friend to counter the shy and understanding nature to Sam, but she plays it convincing despite it's cliche. However the villains in this don't come off as well as the lead, Tom Noonan and Mary Woronov who play the Ulmans are not good. I know that they are suppose to come off creepy and talk and act a bit weird but it all seems forced. Dee Wallace stops by and makes a five minute cameo, which is just awesome. As mentioned above Ti West worked with cinematographer Elliot Rockett to nail that 80's vibe. I'm hoping that West continues to write and direct films as well as this, since a lack of story substance can be common in today's mainstream films. 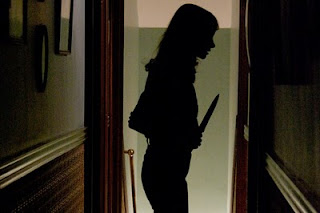 I love the 1980's throwback, so much actually that I propose that the torture porn genre retire and this becomes the new sub genre of the decade. In addition to the Grindhouse films that are reviving themselves. As much as I'd like that to happen I don't think it will, if anything the 'Found Footage' is becoming a more dominant category in the genre. Anyways, besides the ending leaving me a little confused I really liked the film, as you can tell, it gets a bit of hate for the slow moving plot but the artistic value alone should be appreciated. If your feeling nostalgic but want something new I'd give it a rent or watch it on Netflix Instant Watch for convenience.
Posted by Bleeding Dead at 6:01 PM
Email ThisBlogThis!Share to TwitterShare to FacebookShare to Pinterest
Labels: Bloody, Satanic, Suspense

Sweet review. I've noticed that there seems to be an on-going resurgence of 1980's themes in clothing, television and movies. I'm guessing that kids that grew up in that time period are now of age that they control the creative and artistic vision for today's products. Not saying that everything from the 1980's was great, but there was a charming innocence to the entertainment of that decade. I'm enjoying the current revival!

That's probably what it is, they'd be around that age where they'd have a dominate place in the creative industry.

Haha no not everything from the 80's was good, particularly the shoulder pads...or anything Corey Haim wore in The Lost Boys.

Thanks for the comment Carrie, it made my feel better.

I loved The House Of The Devil. I was expecting it to be a piece of crap and was highly surprised at just how much I enjoyed it. I enjoyed the Slow Burning Build up to the rather Creepy final ten minutes. Ti West at his best so far.

Great review, I enjoyed this film as well. I completely agree that the apparent 80's revival should progress into a more persistent influence on modern horror. Out with the overused "found footage" and Saw-style films and in with the revival of the (to be blunt) good horror decades.

Agreed. The statement isn't daftly blunt by any means, the seventies and the eighties were the best time for horror in my opinion. I watch more films from those two decades than I do any modern stuff.