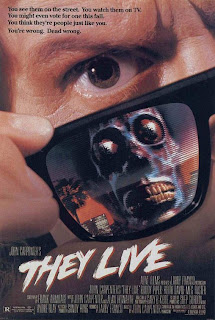 They Live starts out with a beefy homeless man trying to find work. He makes a fairly solid place in a community of homeless workers, who are located on an empty plot of land across what is a seemingly abandoned church, open on occasion for a mysterious choir practice. After snooping around, due to suspicion that something bigger is going on, our main character finds a box full of sunglasses that give him the ability to see what we can't, aliens. It appears that aliens have been living amongst us for years and are slowly taking over our planet for profitable gain, they are entrepreneurs FYI. It's hard to say what I myself would do if I stumbled upon something as big as this, but it's easy enough for our main character, find a bunch of guns and kill them all.

For whatever reason I didn't catch our main character's name, so for the sake of the review I'm just going to refer to him as Big Beefy Guy with Mullet. Big Beefy Guy with Mullet is played by Rowdy Roddy Piper, a former pro wrestler. His acting is nothing less than appropriate for this role, since They Live is a parody and often cheesy. Keith David is also in the movie as Big Beefy guy's kind, maybe a bit angry at times, friend who helps Beefy out. But it's obvious that Big Beefy Guy with Mullet gets all the best lines, undeniably "Brother, life's a bitch...she's back in heat" is inimitable with the rest of the dialog. 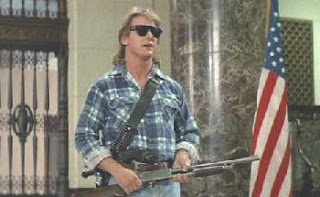 The first half hour of the film is a bit slow, not really picking up until the police ambush the homeless people and the abandon church. The basic's of it could have been squeezed into ten - fifteen minutes, it's not like we'd miss character development or anything relevant like that. Then there's the six minute (yes I counted) fight scene between Beefy and his nice Friend, that could have been cut down significantly since it was a little bit more than absurd after the first four. I also wish we'd of gotten to see the aliens a little bit more, since they were actually a little creepy.

They Live is overall a fun alien invasion movie directed by a horror legend, it's got corny dialog, epic gun fights, and a hilariously memorable last scene/image. I'd recommend for anyone looking for a good B-movie that'll make you laugh.
Posted by Bleeding Dead at 3:22 PM
Email ThisBlogThis!Share to TwitterShare to FacebookShare to Pinterest
Labels: alien invasion, B-movie, John Carpenter, Masters of Horror