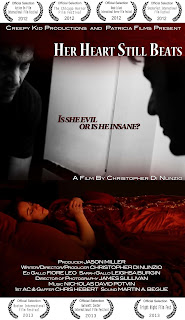 When a husband looks into his wife's eyes one day and to him they've suddenly changed he becomes paranoid with the sense that something isn't quite right with her while also teetering on whether he's sane or not. Based on Edgar Allan Poe's classic horror of madness "The Tall Tale Heart", Her Heart Still Beats is a suitable modern take that captures the maniacal nerve of the original character. The story traces along the edges of its original inspiration but spares a few details differently and ultimately pays off as a update. There's an askewed effect as the differences in the two materials can set you off, but no additional content really feels out of place in the story, just an extension of the directors vision. The character in Poe's work is indicated that his urge to kill the man with the vulture eye was a test of time where as Nunzio's character is seemingly fit with a burst of mania at no explanation. Because of this it plays out a little rough at first but smooths itself out later in the half hour run time and works as an anchor for the film's hitch.

There's no real way around it as I have to be honest but I was not a fan of the acting. I felt the main character was forced and played way too over the top, though other reviews have praised his expressions and intensity. As where the rest of the cast was bland but not necessarily bad, however no one in particular stood out. It's a matter of perspective though and you may judge for yourself. As I praised the idea of the script there's faults in there too as the basic dialogue was a little weak. However the exception was Nunzio's decision to include the original haunting dialect of the character in Poe's story at the beginning and end of the film that attributes to the strength of the concept. It added an extra chill to the madness and is an ode of Poe's words. Cinematography is adaquete, there's a few nice shots and the overall set design mimics a modern married couples home. Her Heart Still Beats is a quality adaption on the Master of the Macabre's most famous work and is thoroughly recommened by me.

Her Heart Still Beats will be streaming this fall and will also be available on DVD. Keep updated at the film's production company's site http://www.creepykidproductions.com/index.php.

I have quite a bit of short films to review but I always care to mention that if your interested in me reviewing your film send it to me at bleedingdead22@yahoo.com.
Posted by Bleeding Dead at 12:53 PM
Email ThisBlogThis!Share to TwitterShare to FacebookShare to Pinterest
Labels: Edgar Allan Poe, Horror Shorts, Insanity/Maddness, Love Story From Hell

I agree on the bad acting. They should have toned it down a bit to give the feel of a more grounded film. It was just hard to take seriously with the acting.

Great write-up! I just found this site and I now follow you! Great site here, I'll be checking in frequently.

If you wanna chat more horror, swing on by my page.