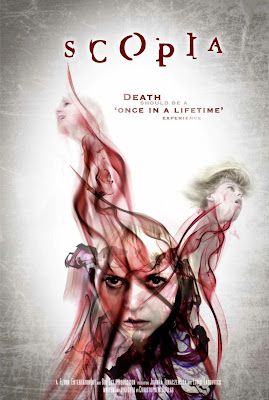 Last week the team behind one of the UK’s most ambitious no-budget indie horror film, “Scopia” went back on crowd-sourcing platform Kickstarter to raise post-production finance.

With elements of Donnie Darko meets The Butterfly Effect meets The Shining meets nothing you’ve ever seen before, “Scopia” hopes to capture the best of modern and classic genre movies while retaining a chilling horror twist at its core.

In Autumn 2012, the released teaser trailer created a ripple of interest across the horror genre bloggers sphere in both the UK and US as the first public outing of sneak film footage.

BACK ON KICKSTARTER
While the initial Kickstarter campaign in 2011 met with mixed results, the filmmakers aspiration this time around is a more modest £5,000 (approx $8,000USD) accompanied with more innovative perks that will stoke the horror and independent fan community into pledging support.   Pledges include “Kill or Be killed”, a pledge that would see participants choosing to play the either the victim or executioner in one of the film’s gory execution scenes.  The cost is a tidy £1000.  On the more affordable side cinema lovers could pay to visit the set of the last remaining scenes to be shot in London, join the crew for a day or if travelling wasn’t an option, perhaps just having a scene sponsored in their name might be the perfect gift.

The campaign, which launched on Thursday 24th January, will close on February 28th 2013.  According to the date of this press release the campaign has raised 12% of its target (£645).
To take part and receive a range of exciting “Scopia” exclusive products, experiences and content make a pledge at :
www.kickstarter.com/projects/scopia/scopia-death-should-be-a-once-in-a-lifetime-experi/

“Scopia” Synopsis:
Basia (Joanna Ignaczewska) is an ordinary polish girl who lives and works in London, who, after suffering from mild depression undergoes hypnotic regression with specialist Dr Edward Stanton (Louis Labovitch).
No sooner do these somewhat unorthodox treatments start, does Basia begin to experience flashbacks. Her world becomes very strange and eventually spirals into a perpetual nightmare as she recalls memories of not only a troubled childhood but also of troubled past lives. As these “memories” gush forth, the vivid and warm memories of her young mother’s kindness subside and start to give way to dark forces that seek to disrupt and destroy her.

As Basia struggles to hold these dark forces from breaking through into her present, she increasingly struggles to retain her sanity and the ability to fight back. There is a way out but it is hardest path to take, shaking her humanity to the very core.

Hot Quotes:
“You might have not heard of Chris Butler and his upcoming debut feature SCOPIA, but if the first trailer is anything to go by, they’re both well worth getting acquainted with.” – Andy Madrzak, JoBlo.com

“SCOPIA is definitely one film to look forward to.” – Horrorbug.com

To find out more information on Scopia you can check the links down below: