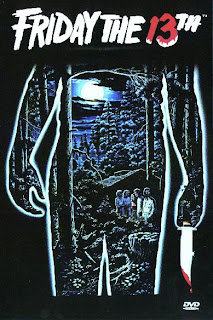 Camp Crystal Lake has had a rather bad string of luck when a little boy drowned in the lake in 1957, since then having bad water issues, fires, and murders. Despite locals preaching a curse Steve Christy has full intent of reopening the camp 13 years later, with horny adolescents as his counselors. Having the counselors come a week before the opening of the camp to do setup proves the curse true as bubbly and child loving counselor Annie never shows up. Unaware that she's been brutally murderer not to far away in the woods the counselors continue their work and their activate teenage interest in each other. When others start disappearing throughout the night the remaining counselors begin to figure that they are not alone at the camp in this true to form slasher classic.

I'm sure it hasn't gone unnoticed but I've more or less said some bad things about Friday the 13th in the past. My dislike of it streamed from my first viewing experience when I was a lot younger and I didn't have the tolerance for the extensive slasher plot. Admittedly I gave it a really bad one out of five starts but as I've gotten old I've grown to appreciate it more for its simple slasher mind. I enjoyed how half the deaths were shown and the other half were discovered, a unique way in keeping the audience scared and surprised. As other reviews have pointed out the fact that the victims don't know until seconds before they die is also rather brilliant in that it leaves no room for suspense, just cold hard fear. Few issues as I had with it back then still hold to me now, such as the randomness of killer. The motive makes sense and all but she shows up out of nowhere and admits to killing everyone. But then again I suppose that's part of the appeal to Friday the 13th. Also I felt that the battle between our killer and Alice was rather lengthy and jolty at best, there was action and then pauses that never made it flow as smoothly as I'd hope. 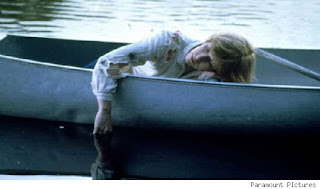 Aidrianne King is our final girl Alice and she's alright as last woman standing but her acting is less than good at times. Her peers are more effective at getting a a pulse from their characters, whether that being the writers fault for making the supporting cast more charismatic than the leads or just how King decided to play her character. We get to watch Kevin Bacon have sex and then die, which is always a good day in my book, seeing how I put him in that level of untouchable awesomeness, only shared by such prestigious figures as John Lithgow and Alan Rickman. Betsy Palmer became an essential over night cult star with her role as Mrs. Voorhees, and I must say I loved her reverse Psycho bit as the heartbroken mother. I must give credit to director Sean S. Cunningham and DP Barry Abrams for creating a stylistic film with unique camera shots from the killers POV. Also they seemed to highlight the full use of their pretty scenery which really felt realistic in regards to the camp. 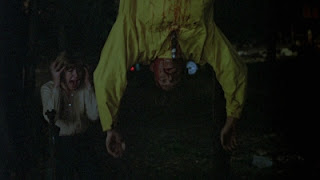 I think I liked Bill's death the most as it was almost a combination of all the previous kills done on to him, and since they don't show it really lets the imagination fill in the blanks. The ending is of course the most prominent part of the film and my personal favorite moment, where they use makeup artist Tom Savini's talent to the full advantage. The subtext or message of premarital sex is still clear, though casual teen sex in 1958 seemed a bit of a stretch to me. This is a cult horror film, none of which to anyone who's reading this I'm sure hasn't seen, so as I'm doubting of a recommendation as its likely unnecessary. All I must say is that while its not my favorite horror film nor my favorite slasher flick, its an important one and a fun scare.
Posted by Bleeding Dead at 2:06 PM
Email ThisBlogThis!Share to TwitterShare to FacebookShare to Pinterest
Labels: Cult Horror, Franchises, Horror Icons, Jason Voorhees, Slasher Film

It's been years since I've seen Friday the 13th, might have watched it randomly for the first - and only time - on TV when I was a kid, but really can't remember now!

Your review has definitely made me want to go and watch it again, as it seems like it is right up my street in terms of the films that I tend to gravitate towards now, and, y'know, I love horror.

Great review, and loving your blog - getting a follow from me, that's for sure!

F13th is definitely a film you need to watch again. Like I said not my favorite slasher flick but a major film in horror.