I excel at contradiction. I've been unfair to my forty three followers (who thought I'd be here in a year? Definitely not me) as August was the month to restart my reviews but I've only done two, with only a week left in the month. Balancing my two jobs, social life, and this blog have been a lot more difficult than I thought, and it's taken my more time to adjust. But I do think I'm on my way, somewhat. To help ease the pain of me being a horrible blogger I've decided to give you a little extra review that contradicts this blog. Book reviews! I know it's The Bleeding Dead - Film Reviews, but who cares? I put press releases on here, at least this is an actual review, even if it is of a book. 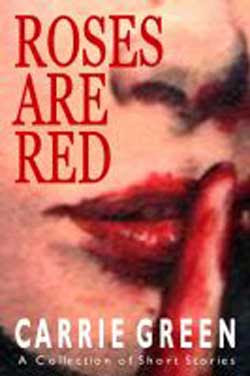 For the first one ever I've decided to review a recent read by one of my really good friends on Twitter, Carrie Green. She helped me out a lot with this blog in the beginning and has always been supportive. If you haven't heard anything of her she's been hailed as a female Stephen King and 'is a real sick puppy'. How can you not want to read a horror novel with claims like that? Her first collection of short stories Roses are Red, is the book of focus. As of yet these have no style or certain flow, as I'm mostly just improving as I go along but if they stick I'm sure after time they'll develop some sort of legitamate style and not resemble the sloppy writing of an seventh grader.

WARNING: These don't spoil the ending to the stories but discuss key plot points and characters that may give away bits of the story. Read with caution.

At surface value the three stories in Roses are Red don't have any connection, but once read you find that Carrie Green braided them together by the common theme of a real life monster. These aren't your monsters you find under the bed or the ones that stalk you and are unstoppable, these are the ones you encounter in everyday life, in real people. As so is the case with 'A Long Distance Relationship' and it's character Alan, a man who's blood alcohol level mixed with anger and fear provokes him to murder his girlfriend. From there you follow Alan as he tries to get away with murder but a telephone call refuses to let him forget. Of the three this is the most gory and I claim as the most supernatural of the stories. The first couple of pages grab you and what keep you reading the rest of the book. Carrie doesn't hesitate when putting you in the story, she does it quick and sharp so you don't feel the pain till later.

In 'A Lucky Human' a man captain of a Universal Cruise Ship (as in space) uses a new crew member to escape a computer who's in love with him. This was my favorite story in Roses are Red as I absolutely loved it. The feel resembled so much of 2001: A Space Odyssey but instead of the computer our monster is The Captain who trades another man's life to escape an unrequited love. It's so unique in premise and engaging in scope that I read it twice. The Captain acts out of pure desperation to be free of the computer's want and need for him, which is already a scary complex in itself; an inanimate object being able to 'feel' for a human, who is a little short on the emotional scale as it is.

There is a certain power in an author who can turn a story you disliked and found relatively boring to interesting and, excuse the common phrase, spine-chilling in the matter of two final sentences. As she did with 'Cash Only'. A pure description of a man not driven by fear or desperation but the cold and seven deadly sin of greed. Up until the last page of 'Cash Only' I thought that the story was weak and overall dull in comparison to the other two but as I said Green's last sentence cuts so harshly in the study of the dark side of human nature that it may be the story to define the book itself. It question actions to feelings, as your presented with two very different characters. Marie the on the run criminal who's over wheliming guilt is leading her to a dark end, and Gene the bounty hunter who's emotional limitation extends as far as his money will take him. Marie pours herself to Gene one night in an attempt to redeem her past shame, though she is the criminal and possibly guilty of murder Gene proves to be the real monster showing an absolute lack of emotion towards another human being in need.
Posted by Bleeding Dead at 2:19 PM
Email ThisBlogThis!Share to TwitterShare to FacebookShare to Pinterest

I'm jumping up and down! I never expected a book review to appear on my favorite movie review site--and it's my book!

I'm so glad that you enjoyed my book and gave it the same detailed examination that you'd normally give a film.

'Roses Are Red' is in great company, some terrifying horror movies have appeared in this blog--I'm delighted to be here--thanks!

Trust me Carrie, Roses Are Red is well deserved in the horror films that appear on this blog.