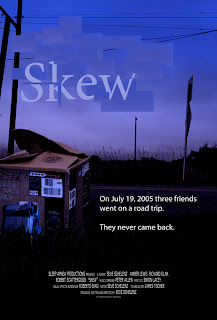 Simon, Rich and Eva are on a road trip heading to a friend's wedding. Simon brings along his new camera to document the highly anticipated trip. What starts out hopeful though turns sour quickly when Simon begins to notice that his camera isn't capturing images right as it creates an askewed vision of the persons' face. And when the blurred people become victims of horrible deaths Simon starts to infer that his camera may be more unique than he thought. Not all is at surface value though as the three friends seem to have a heavy strain on their relationship and the camera is only irritating things more.

Skew succeeds in being a genuine mind fuck, for lack of a better phrase. Inexplicably the camera has a draw to it's carrier Simon and chooses it's victims based on his tampering with matters of life and death. At the core though Skew isn't about the odd deaths that occur from the lens of the camera but the secrets that possess each friend. There's quite a bit of baggage that's weight is felt throughout the film, even as details become apparent and the big 'secret' is revealed you still fell that you've only gotten part of the story. Which is an attribute to the screenwriter and director Seve Schelenz who did successfully instill that tension between each friend and create depth in this portion of the script. The film does drag though and be cautious that you'll spend a good portion of it not understanding what the hell is going on. Also Skew just has some genuinely creepy moments, hence my photo choice below. 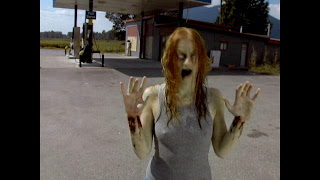 Acting is really weak, not awful all around but a good portion of it seems to be trying a bit hard and a little unnatural. Though each character has their moments of seriousness and they are convincing there are a lot of other parts where it's just not strong. It's not all the actors fault though as a good bit of the problem lies in the writing of the character's themselves. Eva's is difficult to like as she comes off rather pissy from the start, not really allowing us to get a good side to her character even if her anger is warranted. Rich felt almost absent from the film, having few lines and not really making a noticeable presence till the end. And lets be honest, no one really likes the person behind the camera, whom which this unfortunate is Rich. It's that unsought out narrator role that requires constant commentary. Found footage films make it hard for me to address the DP of a film as often they are shaky but as far as cuts, editing, and basic lighting go it's all fairly good. 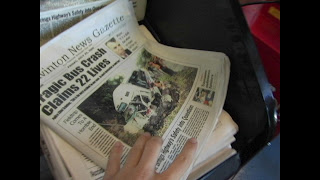 This film came to my attention through Jason at Film Reviews From the Basement who was tweeting while watching the film and expressed much perplexity as the events came to focus. Which in itself is a fair assessment of the film as it really works on a level of disrupting logic to the viewer. I'm not sure if I even liked Skew per-say but it is unique and serves as an interesting take to the found footage genre. It does suffer from a few possessions found in the sub-genre, such as Simon's typical and annoying 'I won't put the camera down' pester that easily pisses off Eva, for good reason. This does, however, have the most feel to the original sub-genre film, The Blair Witch Project, than those that have followed. It picked up a lot of intentional or maybe unintentional homage which I respect, despite not having liked The Blair Witch Project. Based on the rating on IMDB a lot of people didn't like it and as I said I'm not even sure I liked it, but it's interesting and it at the least deserves a watch.
Posted by Bleeding Dead at 7:11 PM
Email ThisBlogThis!Share to TwitterShare to FacebookShare to Pinterest
Labels: First Time Director, Found Footage, Psychological Thriller

Updates, Changes... and No Response you might be considered D.E.A.D.

"The Horror Blogger Alliance" is having a "Give Blood [Money]" Drive,
March 10th to April 1st 2012, for
more details: http://horrorbloggeralliance.blogspot.com/